Walking back to happiness! Every day asylum seeker Sam “walks away from depression and towards a brighter future” in AIT 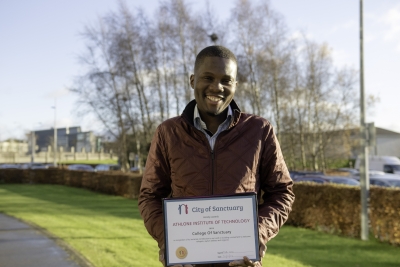 To mark our award as College of Sanctuary we have a personal story of hope and appreciation by Sam, who has direct experience of the humanitarian work and spirit of inclusion that is fostered in AIT and highlights why AIT led by Theresa Ryan and Dr Chris McDermott received the award as the first College of Sanctuary in Ireland

Vuyani Samuel Booysen is a 31-year-old father of two from South Africa. He left his native country for Ireland nearly four years ago in search of a better future, hoping to build up a secure life here into which he would welcome over his two daughters who are in South Africa with their mum.He had no idea what the future held, except that it would hopefully be better than what he was leaving behind. Lady Luck led him to Athlone IT and the asylum seeker’s hard work and appreciation landed him a scholarship to study Civil Engineering.

Vuyani makes no bones about the fact that Athlone IT is his ticket out of depression. Every day, when he sets out from the Lissywollen Centre to the buzzing campus, he’s making the move from the lyrical dark end of the street to the bright side of the road.Sam (as his Irish friends call him) first landed in Navan as part of a group of nine adults from South Africa who secured their legal status as refugees through working for a local contractor in Co. Meath. Sam had the role of office administrator.

“Coming to Ireland was to improve my future. It was a great opportunity for me to work with that company,” says Sam. The opportunity, however, was not what he had envisaged, and after eight months working there, advice from Citizens Information led him to move onwards.

In the absence of paid work prospects, Sam started doing voluntary work with New Horizons and then moved to the Lissywollen Direct Provision Centre, where he was introduced to Athlone IT through their Institute of Sanctuary work.In September 2016, he enthusiastically signed up to the Special Purpose Award Level 6 HETAC Programme being offered by the college. Sam makes no secret of the fact that it was a beacon of light in the midst of darkness: “To get out of the hostel was great. I was walking away from depression, to be productive and educate myself.”

Of a class of about 25 people doing the one-year course, which is aimed at non-traditional-CAO-route students, Sam was one of six from the Lissywollen Centre. Sam’s appreciation and praise for the team in AIT is endearing. “We were all delighted to do the course. It brought excitement and joy. Fr. Shay, Chris and Theresa were very helpful. They were always willing to assist with the work, and they helped us to interact with the Irish students and create friendships.”

In a true spirit of inclusion, there was mutual respect and solidarity. “The class was very united. They made us feel welcome. They didn’t judge us or look down on us. It was more like ‘be happy, be free’. It was a really good year. Actually, it was one of the best years ever,” says Sam.

Of the six Lissywollen students, five attained their qualification. Sam’s enthusiasm and appreciation for the opportunity paid off - he scored highly and was awarded a scholarship for a place on a two-year Higher Certificate in Civil Engineering in AIT. He started in September this year. Every morning, full of hope and determination, Sam makes that journey from the social and political limbo of the asylum seekers’ accommodation in Lissywollen, to the light, the buzz and the promise of Athlone IT. “It’s challenging. I’m determined to do well and get my degree.

Education is the key to everything. Now I can say ‘this is my future; this is my career’.”

Download Hi-Res Image for Walking back to happiness! Every day asylum seeker Sam “walks away from depression and towards a brighter future” in AIT