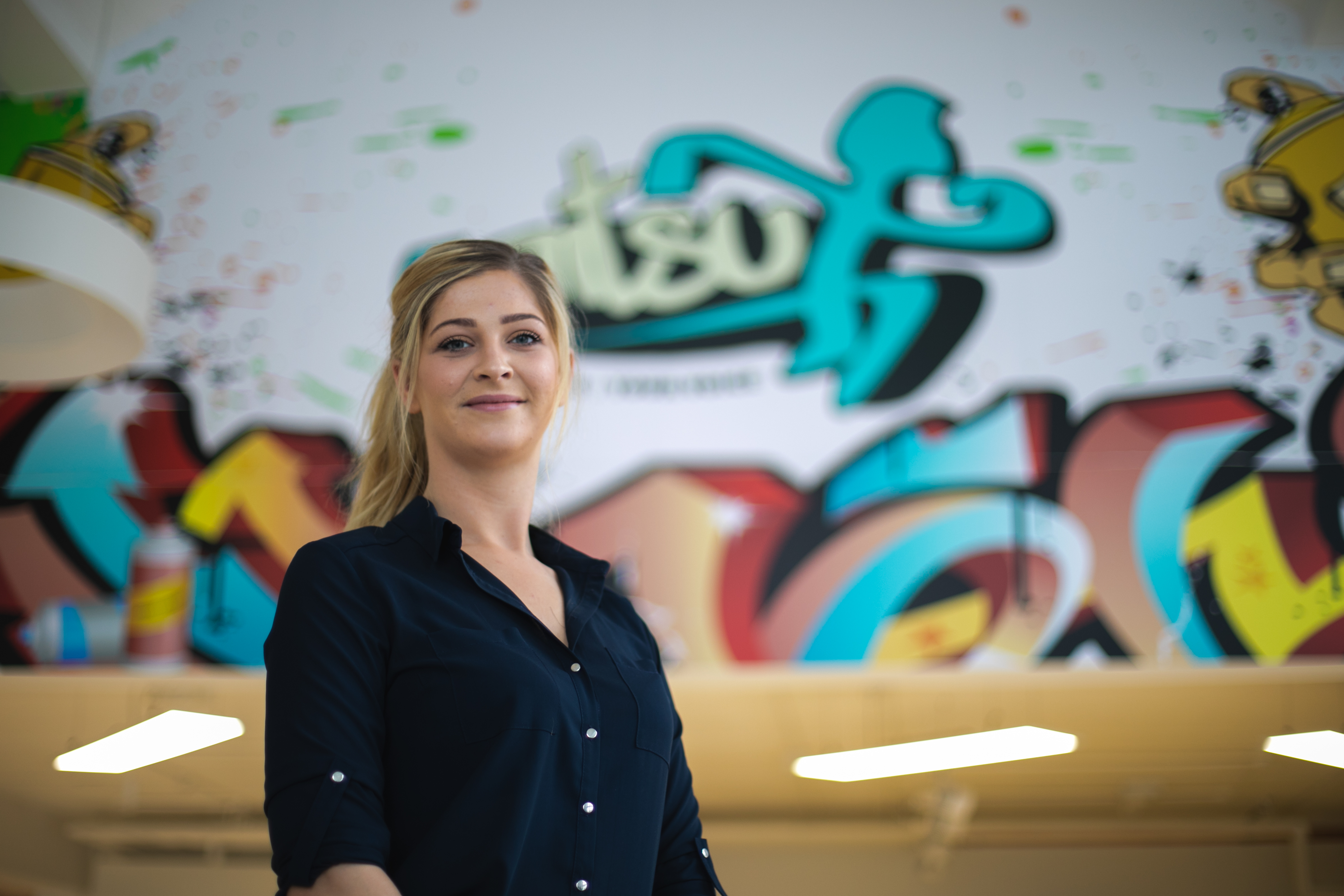 The technological sector’s first fully amalgamated students’ union has been created in anticipation of Technological University of the Shannon: Midlands Midwest opening its doors later this year.

The new union, which has already elected its first president and ratified a comprehensive constitutional framework, is expected to be fully operational with officers in situ by July 1, 2021.

The executives of AITSU and LITSU set out almost one year ago to develop a new unitary entity to serve TUS: Midlands Midwest’s student body, which is projected to grow to 15,000 by 2024.

While similar in size and operating structure, there were a lot of details to be hammered out, including how a multi campus students’ union, 120 kilometres apart, was going to work efficiently and effectively.

The unions enlisted the help of an external facilitator, Senan Turnbull, who is an organisational and governance development specialist for the not-forprofit sector.

A former SU officer himself, some 40 years ago, Senan brought a wealth of experience and knowledge to the role of advising the student executive who, he says, demonstrated an appetite and enthusiasm for the task.

“From the very beginning it was very clear that the two presidents and their supporting sabbatical officers had a common ambition which made it easy to find common ground.

"There was an energy there to want to get things done. Even so, we still had a lot of things to resolve – different expectations, different historical styles and approaches that we had to merge into one new approach,” he explained.

One of the biggest obstacles to overcome was figuring out how democracy would work across a spread campus, rather than a single campus which has been the Athlone experience to date.

“We had to come up with a credible democratic and accountability process that would work notwithstanding those geographic challenges,” Senan said, adding that they had looked at other multisite campuses, particularly in Northern Ireland, for examples of a best practice approach.

An online system was developed to enable officers across the six campuses, who couldn’t physically sit in the same room without spending wasted time on travel, to conduct business at the highest levels of the council and executive.

“I think if we’d done it a year earlier, my own expectations would have been lower – how could you do this if you’re that far apart, but post-COVID, we all unknowingly shifted our mindsets from what was possible online as opposed to face-to-face,” Senan explained.

Over the course of nine joint meetings, commencing in July and culminating in December, Senan helped the SU create a new constitutional framework from scratch, including six accompanying schedules which act as “detailed, operating and procedural documents.” The reason for this, he explained, is to enable the union to adjust without having to hold frequent referendums.

Instead, the new student council, which will act as the senior governing body of the SU, will be empowered to amend the schedules if necessary, in line with the key statements set out in the constitution.

The schedules set out the different roles and responsibilities, from the full-and part-time officers to the SU operations. They detail things like the terms of reference of committees, election regulations, standing orders for the council and executive, and a nominations committee.

Currently, the SU operates as an unlimited association; in the new TU, the SU will operate as a company limited by guarantee, which will protect the union and allow the student executive to bring in non-students to advise them.

According to Senan, while the politics will be left entirely to the students themselves - setting up a company by limited guarantee will help them in handling finance, dealing with contracts and employing people.

“The sabbatical officers will sit as the majority directors of the company but recognising that they do not yet have the skills and experience to get it right all of the time, a number of independent directors and a chairperson will join them on the board to help them make better decisions,” he said.

These “wise people” can also be called on in the event of a disagreement about the union’s constitution or any of its schedules that cannot be amicably resolved through debate.

“This is the first time in the context of the amalgamation of these new universities that a students’ union has been ‘up early and best dressed’, ready to go as soon as they get the green light,” Senan said, explaining that the TUS: Midlands Midwest SU will be ready to serve students as soon as the new university opens its doors.

The composition of the SU is also changing; currently, in Athlone, there is a president, VP for education and a VP for welfare; in Limerick, they have an overall president, a deputy president and two campus convenors. The campus convenor roles will be turned into VP roles in the new SU.

“The deputies will be my right-hand people,” said Áine Daly, the new SU president-elect, who was elected in March and will start acting in her official capacity from July 1, 2021.

“I’ll have one in Athlone and one in Moylish; they will be my representatives across the different campuses and will be responsible for the day-to-day operations.”

With the help of Senan Turnbull, the TUS: Midlands Midwest SU have agreed on a core executive of nine full-time sabbatical officers and a full-time postgraduate officer.

The union’s part-time officers will consist of an EDI officer, a student experience officer, a lifelong learning officer, and an international student officer.

There will also be faculty convenors who will fall into the SU executive and work with the TU on quality assurance in each faculty.

“We made them part of our executive to ensure our students’ voices are fully heard and are properly represented within our organisation. They will each have their own work portfolios, so they will all be managing their own working groups and standing committees,” Áine explained.

“We want to empower them to run eventually for the full-time officer posts, as we need to ensure sustainability in our structures and that there is always someone to take our place to serve our student body.”

Commenting on what student representation will look like in the new TU, the SU president-elect said it is “all about partnership”, something that already exists very strongly in AIT and LIT and has helped drive the process of amalgamation.

“We’re extremely grateful for the support we’ve received from the presidents of AIT and LIT and from the project directors. Everything we’ve asked for or needed, they’ve given us.

"I think that’s really helped push us on to get our documentation organised so early,” Áine said, citing numerous examples of how the colleges’ executive management supported them throughout the process.

She explained that the students’ unions have been heavily involved in flagship projects for TUS: Midlands Midwest from the start: “I was invited to go to Brussels in February 2020 to meet with student representatives from other European colleges to discuss what the ideal university would look like and what future graduates would need. It was a fantastic experience, and I was delighted to attend as an elected student representative for AIT.”

Aside from their involvement with RUN-EU, AIT and LIT SU were asked to participate in an international panel assessment of a TU application.

“It was the first time, as far as we’re aware, that a students’ union had been asked to be directly involved in an international panel visit. We received great support from the project directors, and it gave us an opportunity to explain our new structure to the panel and what we’re trying to achieve as a new union,” LIT SU President Dylan Ryan said.

Dylan, who was elected to the LIT SU in March 2020, explained that his team and the AIT SU "got along from the start": "We approached it with a common goal in mind and that was the creation of a new SU to ensure students across our six campuses were fully represented to the best of our ability.”

Smaller class sizes and individualised lecturer/learner interactivity are often considered the hallmarks of an IoT education and contribute to a close knit, friendly campus culture that many regard as AIT and LIT’s special sauce.

According to Dylan, the new TU will retain this sense of “togetherness”, staying true to its technological mission. “We’ll keep that same engagement profile between staff and students, and that’s where a TU will always outshine a traditional university.”

He continued: “Becoming a TU will enable us to offer greater support and student representation, especially across our smaller campuses, Ennis and Clonmel. We’ve put in place a lot of new structures and processes that will help us represent them even more fully than we do now.”

While traditionally the LIT and AIT SUs haven’t represented students at postgraduate level, Dylan explained that postgrads are a key focus for the new SU, which will involve the appointment of a new, full-time postgraduate officer.

“The significant expansion at postgraduate level will lead to a large influx of postgraduate students who will make up a significant proportion of the wider student body. It is only fair that we take this leap to ensure that they are fully represented in the new TU and reflected in our executive,” he said.

The next couple of years will be a learning curve for the new SU, and in that time, the documents that underpin its new constitution will be reviewed regularly to see what is working and what, if anything, needs amending.

As the new university grows and settles into its new identity, the SU will continue to adapt to complement its structures to best serve the student body.