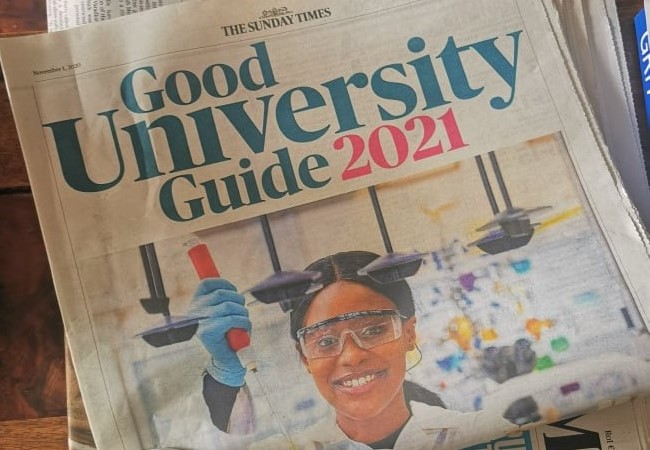 AIT previously won The Sunday Times Institute of Technology of the Year in 2020 and 2018 and came runner-up in 2017.

This is the second consecutive year that AIT has finished top of its class, having previously won The Sunday Times Institute of Technology of the Year in 2020. The third-level institute also held the prestigious title in 2018 and came runner-up in 2017.

Finishing in seventh place, ahead of all other institutes of technology, AIT has outpaced this year’s winner, WIT, by eight points. The institute’s inclusive campus culture and student-centred ethos are among the reasons for its success.

Student experience scores play a critical role in influencing The Sunday Times rankings for third-level institutes. Introduced into the adjudication criteria in 2018, student experience has the heaviest weighting, giving students direct input into where their college ranks.

AIT has continually elicited the highest participation rates of any third-level provider in StudentSurvey.ie, a national survey which considers the holistic student experience, since its inception seven years ago; its students repeatedly report the highest levels of satisfaction with their third-level experience nationally.

Welcoming the news, AIT President Professor Ciarán Ó Catháin said: “I am delighted that AIT has once again topped the national higher education rankings and in so doing, further demonstrated that it is a leader in the delivery of technological higher education. I have no doubt that our exceptional performance in this year’s league table will stand us in good stead as we look ahead to making our debut as Ireland’s newest technological university in future rankings.”

According to Alastair McCall, editor of The Sunday Times Good University Guide, the advent of TUs represents “the most radical shake up of higher education in a generation.” He added that he expects the new TU for Ireland’s Midlands and Mid-West, formed from AIT and LIT, to vie for the top spot among universities in future guides.

The new TU, which will span six campuses across four counties, is on track to open its doors in September 2021.

Now in its 19th year, The Sunday Times Good University Guide provides the definitive rankings for Irish universities and institutes and is the most comprehensive overview of higher education in the country.

Athlone Institute of Technology is a research-led third level institute with an applied, industry-focussed offering, world-class research and development capabilities, and state-of-the-art facilities. Winner of The Sunday Times Institute of the Year 2020 and 2018, AIT is Ireland’s top-ranked institute and is on track to open its doors as the country’s next technological university in September 2021. AIT tops Ireland’s official league table for research and was listed in U-Multirank’s Top 25 Performing Universities in the World for Interdisciplinary Research in 2018 and 2019. For information relating to the institute’s undergraduate and postgraduate programmes, visit www.ait.ie.