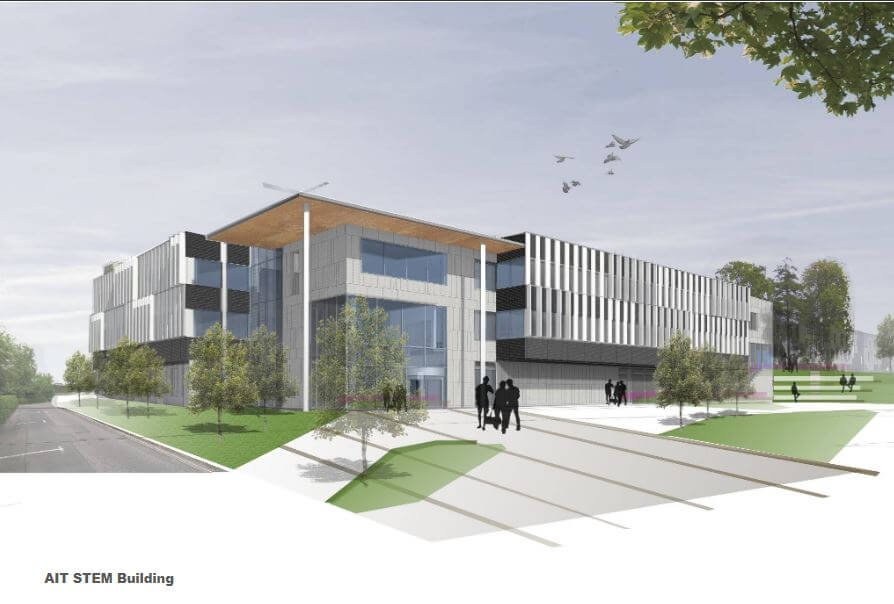 Plans to build a largescale, state-of-the-art STEM facility at Athlone Institute of Technology (AIT) have progressed as a Government-approved higher education building programme moves to tender.

The new purpose-built, three-storey STEM building planned for AIT will span a floor area in excess of 65,000 square feet and create capacity for more than 1000 additional students and 70 staff.

The additional academic, industry and research capabilities provided will further enhance AIT’s campus as it moves towards achieving technological university designation in partnership with Limerick Institute of Technology (LIT).

“This is a significant and hugely positive development for AIT, as it will enable us to meet increased industry demand for STEM programmes and graduates – especially in high growth areas like pharma, biopharma and microbiology,” explained Professor Ciarán Ó Catháin, president of AIT.

“Our technological university mission is to future proof higher education through experiential learning, strong industry engagement and applied, high-TRL research and to provide new opportunities and access pathways to learners with the goal of sustaining prosperity and industrial growth across the Midlands and, indeed, Ireland. This exciting new development further enables that mission.”

Speaking at the announcement last week, Minister for Further and Higher Education, Research, Innovation and Science Simon Harris stressed that higher education has “an essential role to play in driving recovery across Ireland’s regions and in preparing for the opportunities and challenges of a changing economy.”

“The new infrastructure to be delivered under this programme will enhance the campus environment for students and staff, and support strengthened partnerships with industry,” Minister Harris said.

“The buildings will have a strong focus on supporting practice-based learning, including laboratories, workshops and studios. They will also have significant flexibility to adapt to changing teaching and learning needs, and to support hybrid and remote learning.”

The STEM facility planned for AIT is one of 11 major infrastructure projects to be delivered under Project Ireland 2040 – a national plan dedicated to future-proofing Ireland’s economy in a regionally balanced manner.

The contract type envisaged is a Design-Build-Finance-Maintain (DBFM) contract. The successful tenderer for each of the bundles will construct the buildings using private finance and will then operate and maintain the buildings over a period of 25 years.

Funding for the STEM building was originally announced in October 2017 by then Minister for Education and Skills Richard Bruton.

AIT and LIT announced their intention to form Ireland’s next technological university in October 2019.  A significant body of work that has been undertaken on the AIT - LIT Consortium TU project, with TU designation expected later this year.

Athlone Institute of Technology is a research-led third level institute with an applied, industry-focussed offering, world-class research and development capabilities, and state-of-the-art facilities. Winner of The Sunday Times Institute of the Year 2020 and 2018, AIT is Ireland’s top-ranked institute and is on track to become the country’s next technological university. AIT also tops Ireland’s official league table for research and was listed in U-Multirank’s Top 25 Performing Universities in the World for Interdisciplinary Research in 2018 and 2019. For information relating to the institute’s undergraduate and postgraduate programmes, visit www.ait.ie.