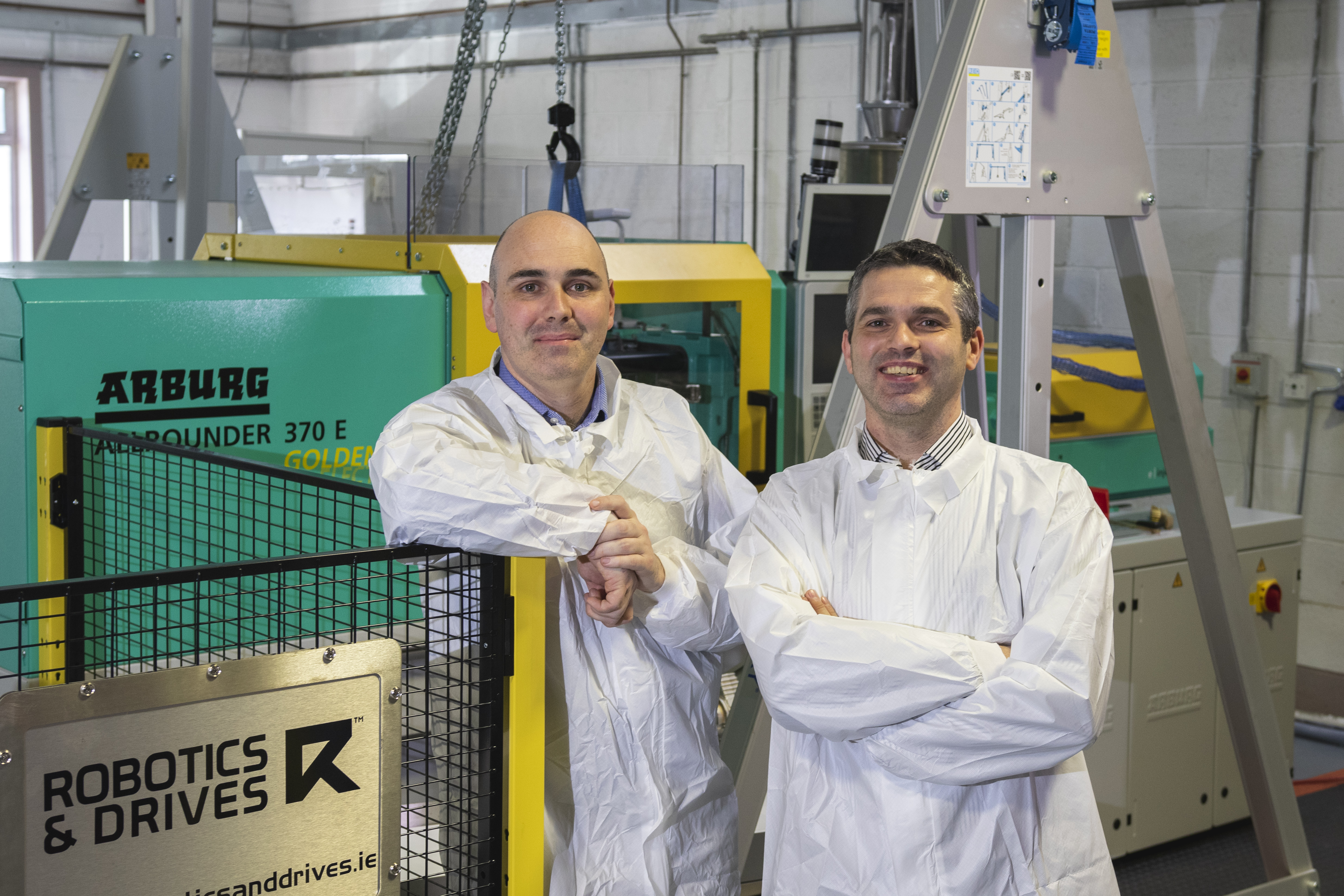 Ireland is on the precipice of a fourth industrial revolution driven by advances in smart manufacturing – a convergence of the digital and physical world which enables machines to ‘talk’ to one another through the internet. At the epicentre of this seismic technological shift is Athlone Institute of Technology’s brand new smart manufacturing cell, which aims to take ‘people out of the process’, instead using robots, intelligent sensors and complex algorithms to improve the accuracy, reliability and speed of production lines.

The confluence of these emerging technologies has the potential to drastically reduce manufacturing costs by minimizing the mistakes that happen in the production process. “Using complex algorithms, we can actually teach computers how to optimise and adjust processes without the need for human intervention. If a part goes out of spec, the machine will realise and compensate immediately which has the potential to save companies large amounts of money,” Dr Declan Devine, Director of the Materials Research Institute at Athlone Institute of Technology, explained.

“While there’s a lot of talk about smart manufacturing and industry 4.0, from a practical industry perspective, people’s perceptions of it are still very vague. It feels intangible,” Dr Devine said. “For Ireland to move forward as a centre of smart manufacturing, it’s crucial that industry gets behind it. We’re trying to facilitate this by upskilling people in emerging technologies and giving industry a testing-ground to try out these new smart manufacturing capabilities.”

Companies interested in utilising the pilot line can work collaboratively with the team in one of two ways. Either the institute purchases equipment and has it working in-situ but licensed out to the company, or, alternatively, the companies can bring their own technology, for example a robot, install it into the cell and learn how it works in tandem with other technology before taking it back and implementing it in their own facility. “A lot of the companies who’d have use for this facility have systems in place with some of the major medical device companies but can’t bring clients to see these systems due to conflicts of interest or concerns about competitors,” Dr Devine explained. “Instead, they can set up their systems here so that they can show new or potential clients what their products can do in a neutral environment.””

The team has developed special training software to work in tandem with the smart manufacturing cell to show users how to set-up and operate the smart manufacturing machines. “All you need is a smart phone and a control panel and you can show people how to use a machine. The software will talk you through which buttons to press for which outcomes. It’s a really great training tool for people working in industry but we can also use this technology to train our students,” Dr Niall Murray explained.

Currently, the training technology enables the user to see changes happening through virtual reality, but the plan is for the actions to manifest in real life. The team will host a digital twin that represents the virtual reality world adjacent to the physical set-up whereby changes made in one will be reflected in the other. “We use complex algorithms to make this happen. Data. It’s all down to data. All of these machines have data inputs and outputs which is what makes them ‘smart’ in the first place,” Dr Murray said.

Athlone Institute of Technology has long been at the forefront of polymer research and innovation, producing generations of highly skilled polymer engineers who now form the backbone of Ireland’s thriving medical technology sector – a sector which is heavily reliant on polymer technology. “We’re known as the ‘polymer people’ across Ireland and Europe. Polymer is vitally important to the Irish economy with over 200 companies in the sector,” Dr Devine explained, adding: “The majority of medical devices require at least one polymer component making it a core technology in the MedTech sector which itself is 400 companies strong and employs over 12,000 people nationally.”

In the Western world, where the cost of labour is high, the only way for companies to compete with countries with low-cost labour is through highly sophisticated, automated processes i.e. smart manufacturing. “If Ireland wants to remain competitive, we have to act now before we get squeezed by low cost and high tech economies already embracing smart manufacturing. It’s not a question of if we act, we have to act or else we’ll haemorrhage jobs. People might fear automation, but the reality is smart manufacturing will have an incredibly positive impact on the midlands and the Irish economy. “Current research indicates that for every robot brought into a company, three highly-skilled jobs are created. None of these jobs are going to be minimum wage – they’ll be highly skilled, well-paid polymer, automation and software engineering jobs,” Dr Devine said.

As a primary member of the CONFIRM consortium, being selected to establish this new smart manufacturing cell and subsequent pilot line speaks volumes about Athlone Institute of Technology’s reputation as an innovation partner of choice for industry – demonstrable by the sheer volume of Enterprise Ireland Innovation Vouchers it completes every year. “Our smart manufacturing cell is a national resource for industry to utilise. We want companies big and small to know that we are open for business. We have the funding, we have the people and we have the expertise,” he finished.

An educational powerhouse defined by a commitment to academic excellence, rigour and applied education, Athlone Institute of Technology has enjoyed considerable successes in the academic arena this year, most notably being named ‘best in class’ for research across the technological higher education sector. Further solidifying its reputational prowess, the institute was recently awarded ‘Best Academic Partnership’ at the prestigious national Education Awards for its part in developing SURE, Ireland’s first academic network dedicated to promoting undergraduate STEM research across the technological higher education sector. These accolades build upon the institute’s success in winning the Sunday Times Good University Guide ‘Institute of Technology of the Year’ award in 2018.