Athlone Institute of Technology (AIT) has been designated as a College of Sanctuary in recognition of a range of initiatives demonstrating a commitment to welcoming asylum seekers and refugees into the college community and fostering a culture of inclusion for all. AIT is the third HEI in Ireland - following DCU and UL - to attain this accolade and is the first recipient of the College of Sanctuary which is awarded by Places of Sanctuary, an organisation that supports efforts in Ireland and the UK to build a culture of hospitality for people seeking sanctuary.

The award was marked at a celebratory event held on campus which was attended by all of the of the stakeholders involved including the team from AIT Theresa Ryan and Dr Chris McDermott who lead the committee for the Integration of Asylum Seekers and Refugees, the residents of the local direct provision centre, New Horizon volunteer group and Westmeath Community Development.

President of AIT, Professor Ciarán Ó Catháin on receipt of the award said, “Today is a proud day for AIT as it becomes the first Institute of technology in Ireland to be awarded ‘College of Sanctuary Status’ in recognition of its efforts to foster an environment of inclusion and social integration. It is a great honour for the Institute to receive this award and it is a fitting tribute to the collaboration between AIT staff and students, residents of the local direct provision centre, the New Horizon volunteer group and Westmeath Community Development. This collaboration has helped to foster a spirit of inclusion and hospitality to asylum seekers and refugees living in the Midlands. We recognise that receiving this award today is not an end point, and AIT is committed to continuing on this journey, in cooperation with New Horizon, with our ultimate aim being the creation of a truly inclusive environment for asylum seekers and refugees in the Midlands.”

Prof Ó Catháin also announced a scholarship scheme at the event by adding, “In celebration of today’s award, I am delighted to officially announce the establishment of the AIT Institute of Sanctuary Scholarship Programme. This programme will run on an annual basis and will comprise of six places on the AIT access programme, as well as 3 scholarships for undergraduate programmes in the Institute. The scholarships, which will consist of a fee waiver and financial assistance, will be open to all current and former residents of the Lissywollen Direct Provision Centre and to persons who are or were unaccompanied minors in the care of the Child and Family Agency. While we recognise that this scheme is a modest contribution in light of the vast need that exists in the area, we do believe that it constitutes a positive initiative in the promotion of social integration.”

Minister David Stanton, Minister of State at the Department of Justice and Equality with special responsibility for Equality, Immigration and Integration said: “I am delighted that Athlone Institute of Technology, working closely with local partners and volunteers have received this important award and recognition. The role of institutions of learning and education is emerging as one of the most important facilitators in allowing refugees and migrants to integrate into society and I know from Ireland’s intake of refugees from Syria that a key concern of many, especially young people, is to be able to continue their 3rd level education or have their qualifications recognised in some way. In the context of the National Integration Strategy and the Irish Refugee Protection Programme the work being done in the Institute is actually evolving best practice in an Irish context and both I and my officials welcome the various initiatives and the recognition of the Institute as the first College of Sanctuary in Ireland. You should all be immensely proud and I hope that other institutions of learning follow your example.”

Tiffy Allen from Places of Sanctuary added that they are “deeply impressed by AIT’s commitment to welcome and include refugees and asylum seekers, and delighted to recognise AIT as the first College of Sanctuary in Ireland. I spoke to the students and they will tell you that you go to any part of the college and it’s like the word welcome is written everywhere. When people need to feel safe and you have this sense of welcome that you have here, that is a place of sanctuary and I want to congratulate all of you and say that it has been a great privilege in Places of Sanctuary Ireland to give you this award.”

AIT established a Committee for the Integration of Asylum Seekers and Refugees and set out to create formal links with the New Horizon Refugee and Asylum Seeker Support Group, Westmeath Community Development, and the management company in Lissywollen. A team from AIT, led by Theresa Ryan, Access Officer, commenced humanitarian work with the Lissywollen Direct Provision Accommodation Centre on the edge of the town of Athlone, by way of contributing to social integration and academic advancement of asylum seekers and refugees in the Irish Midlands.

AIT first reached out with a children’s Christmas party on campus, and 40 children and parents from the Lissywollen Centre attended. Mindful of adverse attitudes to women in some cultures, AIT established a weekly women’s group, with students and staff from AIT leading workshops in creative writing, art, knitting, flower arranging, sewing, crochet, and nail manicure and art. Among other initiatives were social outings including to a performance in the local Little Theatre and to exhibitions, and events in partnership with the local football club.

New Horizon and AIT collaborated to provide a lecture series to inform and enlighten students and members of the general public about migration issues, with AIT’s Law Lecturer Dr. Chris McDermott sharing his expertise. They also ran a weekly legal information clinic on the direct provision site.

Career and curriculum vitae advice was provided to Lissywollen residents by AIT staff and New Horizon volunteers, English language classes were delivered, and library membership including computer access was rolled out. An online learning programme was developed by AIT and over 40 residents availed, and AIT and New Horizon collaborated to develop a website that provides information and opportunities to residents.

non-traditional-CAO-route students. Five completed the programme and attained their qualifications. One exemplary student, 31-year-old South Africa native Vuyani Samuel Booysen, was awarded a scholarship and is now on his way to earning his Civil Engineering qualification in AIT.

Law Lecturer Dr. McDermott expressed the team’s pride in attaining the honour. “AIT is proud to join a prestigious list of higher education institutions in Ireland and in the
UK who have been awarded College of Sanctuary status for their efforts to build a culture of hospitality for people seeking refuge. College of Sanctuary status indicates a commitment to assisting those who have fled persecution in their home countries. The events of recent times, particularly in places like Syria and Afghanistan, demonstrate the vast need in this area. Great credit is due to Ms. Theresa Ryan and Fr. Shay Casey of the AIT Access and Chaplaincy Offices for their work in opening the doors of the Institute to asylum seekers and refugees.”

Both Ms. Ryan and Dr. McDermott have a personal conviction in the humanitarian approach and a spirit of inclusion. Ms. Ryan commented; “The approach AIT has always taken is one of social inclusion, the inclusion of people from different counties and countries, with differing religious beliefs, ethnic origin and levels of ability and disability. This approach is hard work and some people would be critical of it, but having worked in this humanitarian way for a long time, we have no doubt that it is the right thing to do.”

Chris McDermott agreed: “To hear first-hand the personal stories of asylum seekers and refugees, the circumstances that led them to flee their home countries and their journeys to Europe is a very humbling experience – such stories give an insight into the strength and depth of their characters. Refugees and asylum seekers, like other categories of migrants, make a major contribution to the countries that they settle in, when given an opportunity. It is hoped that AIT will provide that opportunity.”

Mayor of Athlone Aengus O’Rourke concluded the ceremony by saying, “I would like to congratulate AIT on its recent designation as a “‘College of Sanctuary’ in recognition of a range of initiatives demonstrating commitment to welcoming and supporting asylum seekers and refugees in the college community, and to fostering a culture of inclusion for all.” 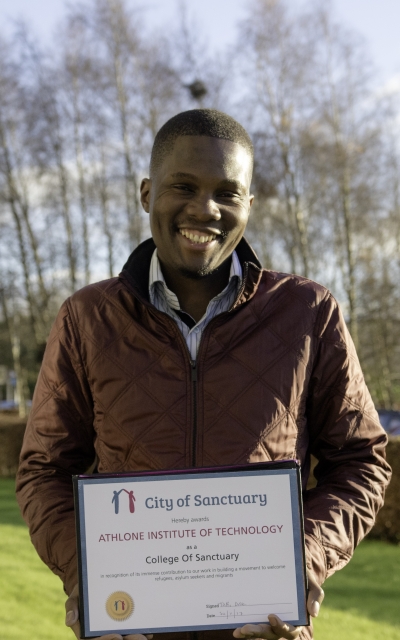