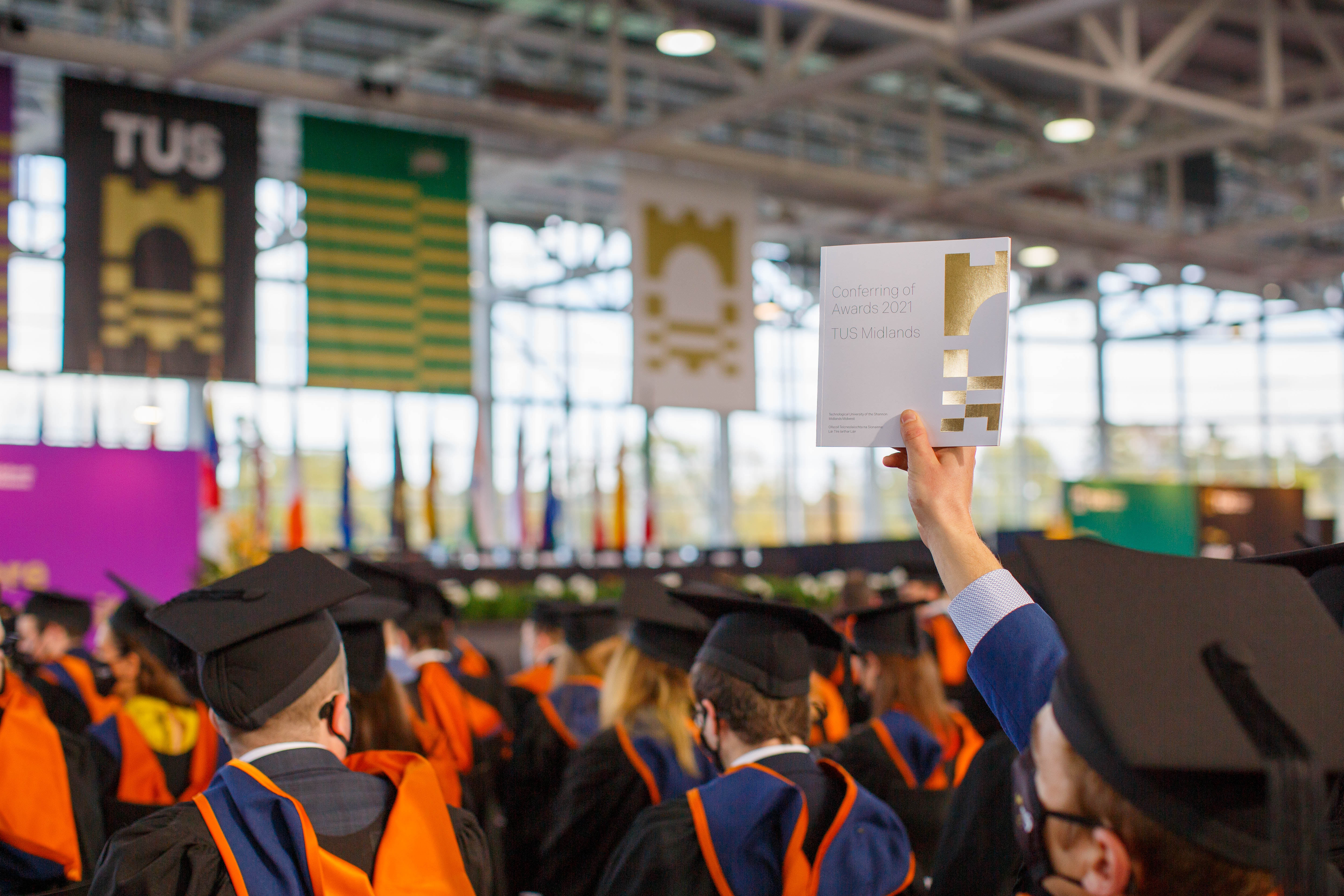 Over the course of three days and seven ceremonies, 1944 undergraduate students and 329 postgraduate students, including three master’s (research mode) and nine PhDs, were conferred with university awards.

The inaugural graduation marked the first in-person ceremony to take place on campus since the country went into lockdown in March 2020 due to Covid-19.

In his speech, TUS President Professor Vincent Cunnane explained how Covid-19 had “challenged education” and commended the graduates on their “remarkable resilience, agility, strength, and determination” in the face of such “significant challenges” in the latter part of their college journey.

As inaugural graduates of TUS, he said that they occupied a special place in the unfolding story of the new university and called on them to use their newfound knowledge and skills to make an “impact on people’s lives and the world.”

He also commented on the “transformative power” of education and how TUS’s new emblem – a bridge – symbolises accessibility and inclusion. “Education, itself, is a bridge; it provides learners with opportunities for self-development, to succeed and drive change,” he explained.

In noting education as a great equalizer, he acknowledged the many routes the class of 2021 took to enter higher education – some through CAO, some through PLC, and others through apprenticeships or access courses.

One such graduate is Dr Emer O’Neil from Castlepollard, Co. Westmeath, who returned to education as a mature student after 10 years of working and completed a Level 5 Certificate in Forensic Science before progressing up through the ladder system and, ultimately, achieving a PhD in Toxicology.

Another is Dr Chaitra Venkatesh from Mysore, India, whose PhD in Polymer Engineering, from TUS’s Faculty of Engineering and Informatics, focused on smart drug delivery via dissolvable coronary stents.

Congratulating the class of 2021, Vice President of Academic Affairs and Registrar and Master of Ceremonies Frances O’Connell said she hoped they would remain “fiercely proud” of their alma mater and remember their time spent studying in Athlone with great fondness.

Echoing Professor Cunnane’s words, she said she would watch their continued journey with great interest and pride as they navigate their next steps in life and begin the next chapter in their story.

She also offered her congratulations to the students who were awarded special awards, including Higher Certificate in Software Design graduate Yulia Dovbak, who was named the overall TUS Midlands Student of the Year and the Student of the Year – Faculty of Engineering and Informatics for her significant academic achievement. Yulia is continuing her education with TUS Midlands and is currently enrolled on the BSc (Hons) in Software Design with Cloud Computing.

Ciara Blackwier Cadden, who graduated with a BA (Hons) in Accounting, received the Student of the Year - Faculty of Business and Hospitality award; Marcella Hand Arrigan (BSc in Pharmacy Technician) took home the Student of the Year award from the Faculty of Science and Health; in the Faculty of Continuing, Professional, Online and Distance Learning, Eliosha Lydon, who graduated with a Certificate in Real Estate Administration, won the prestigious award.

TUS Midwest's 2021 conferring of awards will take place at the newly named TUS Gaelic Grounds in Limerick over four sessions on November 9 and November 10.