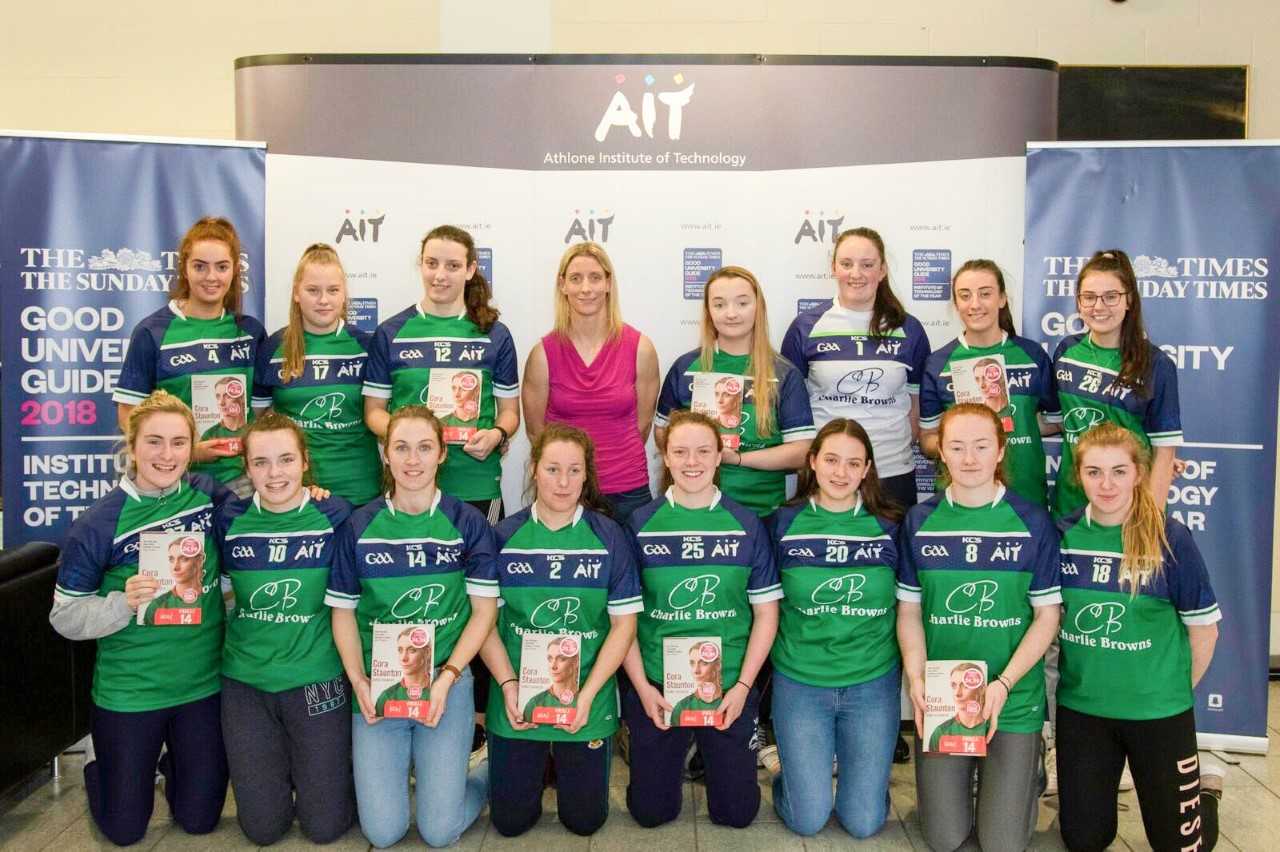 Cora Staunton: “Whatever your dream is, work at it, try hard.”

A trailblazer in the world of women’s sport, professional footballer Cora Staunton is a remarkable character powered by sheer grit and determination to succeed. Mayo-born and bred, the once in a generation talent is one of Ireland’s most decorated Gaelic footballers with four All-Irelands, three Ladies’ National Football League titles and eleven ‘All-Star’ accolades to her name. A ferocious and respected opponent on the pitch, Cora has become the face of the modern GAA and the poster woman for Irish sporting success. She has increased the visibility of women in sport and inspired and encouraged a whole new generation of young people who, through their love of the game, have found a sense of community, belonging and purpose.

In her explosive debut autobiography – Game Changer - Cora reveals her extraordinary journey from teenage rookie to the highest-scoring forward in the history of ladies Gaelic football. She also details the career-defining adversities she’s faced, including her move from amateur to professional football. Game Changer is the first ever autobiography by a female GAA star and will take its place as one of the most influential and powerful sports books in recent history.

Cora’s innate sporting ability was evident early on. At the tender age of 13, she was asked to join the Mayo senior ladies team. While she excelled on the pitch, off it Cora’s personal life was in turmoil; beset by a family tragedy. While struggling to cope with the loss of her mother to cancer, the young sports star won her first All-Ireland and was catapulted to fame. At the time, she was also juggling her education and trying to decide where to attend third level. Many of Ireland’s high-profile sports people were attending UCG (Now NUIG) and DCU, but Cora, true to form, bucked the trend, opting instead to study for an honours degree in Sport at Athlone Institute of Technology. Reminiscing over this decision at her recent book signing at the institute, she remarked: “Athlone was the ideal place for me because it was where I felt at home and was somewhere I fitted in; where I felt I belonged. My lecturers and peers made me feel welcome, like I was part of something special. As an 18-year-old who’d just lost a parent, that was extremely important to me.”

Community has always meant a lot to Cora, who grew up in a “very tight-knit” rural community in Co. Mayo. As a theme, community and the importance of belonging permeate her debut autobiography. She speaks of the importance of “staying grounded” and how she didn’t realise, until she sat down to write Game Changer, how valuable her college experience and the opportunities it afforded her were in that regard. “I really enjoyed college life. We were lucky enough at the time to be doing extremely well with Co. Mayo, winning All-Irelands. At the time, we were a big deal and in the media a lot of the time. As an 18, 19 or 20-year-old, it’s not the place you wanted to be, but I was lucky to have had guidance. The college was always a place that if you ever got too big for your boots, you’d be soon brought back down to reality because you were part of college life. I’m grateful for that.”

Cora, who was inducted into the Sports Department Hall of Fame last year at the college’s annual Sports Awards, has long been a supporter of the institute, giving back whenever she can, however she can. Her generosity of time and spirit has had a lasting impact on her alma mater, a sentiment echoed by Sport and Recreation Department Manager, Gordon Brett who remarked: “Cora was a wonderful ambassador as a student and has been a wonderful ambassador ever since she left. She is an icon of sport in Ireland and we are extremely proud of all that she has accomplished throughout her career. Ladies football has come on leaps and bounds since her early days at the institute which is a huge tribute to her legacy.”

Cora’s work ethic and commitment to her sport are unquestionable. From the beginning, she’s pushed herself and striven to constantly improve her game. In 2017, this tenacity paid off. The 36-year-old became the first international player signed by a women’s Aussie Rules team, paving the way for other female players to go pro. Cora capped an incredible debut season and went on to win her club, the Giants, ‘Goal of the Year’ award. Despite her success, the sports star doesn’t think she’s anything special and says that with hard work and dedication, anyone could achieve what she’s achieved if they just set their mind to it.

“To most people, I’m Cora the footballer or even Cora the sports star, but, in reality, I’m just Cora the person. I’ve worked really hard to get to the top of my sport. I’m very driven, very stubborn and I just want to achieve all of the time. The latest journey of my sporting career is the AFL in Australia, I’ll be heading back in about ten days’ time to try and challenge myself to do even better than I did last year,” she said.

Reach for the Stars

Packed full of current students, including sports scholarship students, the Ladies Gaelic Football team, and the wider staff body, Cora’s AIT book signing proved a massive success. Game Changer is a vital read, especially for students intent on carving out a successful sporting career because it shows the complexity of people’s lives and the challenges overcome on and off the pitch. Her parting words to the young hopefuls she’s inspired were simple: “Whatever your dream is, work at it, try hard. As I always tell kids when I’m visiting schools – dream big. If you believe it and work hard, you will achieve your dreams.”

As Cora heads into her second season as a professional Aussie Rules player, she does so with the full support of the institute behind her. She is a true trailblazer in Gaelic games and sport in general, going far beyond the limits of women’s sport or female codes. Her abilities as an athlete, her achievements on the field, and her transition to professional sport mark her out as one of Ireland’s greatest sportspeople. For young people, Cora is a beacon of what can happen when you persevere, when you challenge, and when you embrace your talents, regardless of what they are.

Download Hi-Res Image for Cora Staunton: “Whatever your dream is, work at it, try hard.”