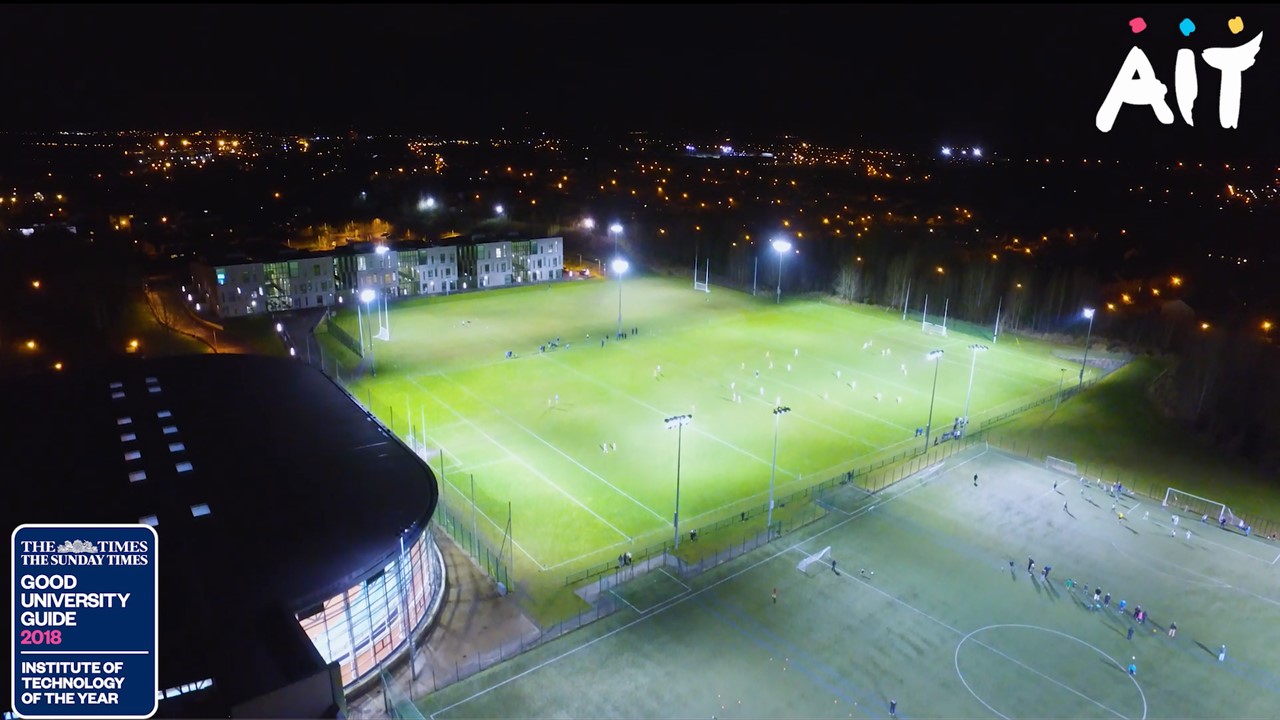 NUI Galway is the University of the Year for the third time since the guide was first published in 2002. The university first won the award in 2002 and again in 2009.

The university, which excels across the arts and sciences, has seen considerable recent investment. Michael D Higgins, President of Ireland, opened the O’Donoghue Centre for Drama, Theatre and Performance in April and a medical academy has come on stream in Donegal, in the grounds of Letterkenny University Hospital.

The university has a reputation as a centre of excellence in relation to medical technology, as evidenced by the launch in September 2016 of Curam, Science Foundation Ireland’s (SFI) centre for research in medical devices. The centre promotes links between academia and industry partners. The SFI and various companies will invest €49m over six years, with €19m more in funding coming from the EU’s Horizon 2020 programme.

The quality of academic staff at NUI Galway is also crucial to the university’s success, with a number of professors such as Henry Curran, Colin O’Dowd, Donal O’Regan and Dr Ronan Sulpice named among the world’s most highly cited researchers in an analysis of published research by multinational group Clarivite Analytics.

Research citations have helped the university rise further up the international university rankings this year. Academics garnered around €89,000 per head in research income in the Good University Guide’s latest survey of research power.

NUI Galway boasts the best job prospects of any university in the republic with an impressively low three percent graduate unemployment rate, together with one of the best progression rates, which sees 88% of students complete their studies.

“We are very well attuned to the needs of the country and the region,” says Dr Jim Browne, President of NUI Galway. “We try to orient our programme for the needs of our economy in the longer term. We also try to have an appropriate balance of traditional academic scholarship and work-based learning. We have a target that 80% of our undergraduate students would have experiential learning.”

More than 260 students took part in NUI Galway access and foundation courses this year, with 150 receiving an offer of entry. In total, the access programme office has 1,100-plus undergraduates on its books.

NUI Galway’s openness to alternative means of teaching and learning is evident, too, in its work with the Irish language. The university is close to the
Connemara Gaeltacht, the largest Irish-speaking area in the country and as such NUI Galway celebrates and promotes the Irish language offering classes from beginner to advanced level as well as programmes taught through the medium of Irish.

Alastair McCall, Editor of The Sunday Times Good University Guide, said: “In the eight years since NUI Galway last won our University of the Year award it has continued to grow its global reputation as one of the great seats of learning. Some of its academics are among the most cited in the world and its reputation spans the arts and the sciences. The university brought in more than €65m of research income last year, evidence of the cutting edge at which many of the academics operate.

“It is also pivotal to the regional economy, rooted in its community and playing an active role at all levels. Its students are encouraged to volunteer and be part of that community and not just come to Galway as educational tourists. When Galway is the European Capital of Culture in 2020, the university will be at its heart; the newly-opened O’Donoghue Centre for Drama,Theatre and Performance a bold statement of the importance of the arts to the university.

“Its triumph in this year’s University of the Year award is also a tribute to the leadership of University President, Dr Jim Browne, whose 10-year term of office ends early next year. He leaves NUI Galway in a position of great strength, ready to make further progress in world and national university rankings, and offering a distinctive third level education to future generations of students.”

Trinity College Dublin is the runner-up for the University of the Year award. It finishes top in four of the seven measures used by The Sunday Times Good University Guide to rank Ireland’s universities and institutes of technology.

A remarkable 24% of the total number of all applications submitted to the CAO in 2017 were to Trinity, while 11% of the level 8 applications had the city-centre university down as their first choice – an increase of two percent on 2016. With fierce competition to get in, students are more likely to complete their course and 91% of them progress to their second year.

The university — which is celebrating its 425th anniversary — has just 3.9% graduates seeking employment nine months later, putting it in the top five institutions in Ireland on this metric. Perhaps its most prominent graduate currently in employment is Leo Varadkar, the first Trinity alumnus to be elected Taoiseach.

Leading the way in social consciousness, it won the Chambers Ireland Corporate Social Responsibility award for its Trinity Access 21 Project, a mentoring programme for more than 1,200 post-primary students from schools with lower-than-average higher education progression rates.

AIT’s association with polymer engineering is particularly strong, with PhD graduates each year, plus level 8 honours degrees in the area and applied and basic research. And the IT is now also the lead provider for a new three-year apprenticeship that leads to a BSc in polymer processing, one of the first of the new employer-led apprenticeships in the country. These address an important gap in the market and one that is on trend: IBEC groups in the medical technology and polymer sectors launched three new apprenticeship schemes this summer.

AIT also identified a skills shortage in the biopharma and medtech sector and, after two years in development, has launched a degree in microbiology — the only course of its type offered through the CAO.

However the focus of AIT is not solely based on science as the Institute recently developed a progressive new educational and training programme for social care students together with non-governmental organisation (NGO) Genio. A supported self-directed living (SSDL) certificate course teaches practitioners how to enable people living with a disability, mental health issue or dementia to move from being marginalised into living full lives in their communities.

Allstair McCall said: “Athlone has risen to its highest ranking in The Sunday Times Good University Guide league table this year, further eroding the traditional divide in league tables between the universities and institutes of technology. It makes an attractive offer to students nationally and plays a pivotal role regionally as a centre of excellence in everything from polymer engineering to smart manufacturing.

“Its appeal to students is evidenced in the findings of the Irish Survey of Student Engagement. The fact that nearly two-thirds of them respond to the survey, against a national average of 27%, speaks volumes, as do results that put Athlone ahead of the field in vital areas for students including effective teaching practice, a supportive learning environment and providing high quality interactions between academics and undergraduates.

“Its win this year is thoroughly deserved.”

“We have always been as ambitious for our institution as we have been for each and every one of our students. This award is an important inflection point in our near 50 year history as we continue to further solidify our status as an academic centre of excellence. AIT is a community of like-minded, driven, thought leaders.

It is this sense of community that fuels the dynamism and energy you feel at AIT and what allows us to continuously match industry needs and consistently high student satisfaction so seamlessly. This award is a recognition towards the culture of innovation cultivated at AIT and a vindication of the hard work put in across the entire community, from the academic and support staff and to the student body.”

Letterkenny IT (LYIT) is runner up as Institute of Technology of the Year for 2018.

The Institute’s cross-border relationships with the North West Regional College and Ulster University boost regional access to higher education, innovation and job creation. Among other things, LYIT has increased the number of students from Northern Ireland by 81% over the past three years.

Teaching and learning is a priority at LYIT. The institute offers an MA in this subject and 51% of its academic staff has a pedagogical qualification, up from 30% three years ago.

Dedication to improving the learning experience can also be seen in the work LYIT has put into learning from students. Like Athlone, LYIT has enjoyed considerable success in the Irish Survey of Student Engagement (ISSE). And a student participation scheme for class representatives, first tried out in 2016, has resulted in a 66% increase in active contributions at class rep council meetings.

The student response rate for the ISSE stands at 34% in 2016-17, against a national rate of just 27%. A total of 86% of students would choose Letterkenny again if they were starting their studies afresh, compared to 82% nationally, and 88% evaluated their student experience as excellent or good, compared to 83% nationally.

The Sunday Times Good University Guide is now in its 16th year of publication. It provides the definitive rankings for Irish third-level institutions, together with profiles of each institution and a view from students of what it is like to study there. It also contains the first full listing of 2018 degree courses and the first round entry points needed to access these courses from the recently-completed 2017 admissions cycle.

There is a tablet edition, plus extended online coverage at www.thesundaytimes.ie/gooduniversityguide features fully searchable tables on each of the measures on which institutions are ranked, together with extended profiles of each. It also contains full access to the newspaper’s UK university guide published on September 24.

IF USING THIS INFORMATION PLEASE CREDIT THE SUNDAY TIMES

To interview Kate Butler, the
compiler of The Sunday Times