Developing a full plastics circularity will contribute to a significant reduction in greenhouse gas emissions and increase resource efficiency and job creation.

A number of innovative booster technologies are at the core of this solution - accentuating, expediting, and augmenting mixed plastics degradation to levels far in excess of those current achievable.

Global production and consumption of plastic has grown exponentially in recent decades. Since the 1950s, approximately 8.3 billion tonnes of the material has been produced – 60% of which has ended up in landfill or the natural environment.

Researchers believe that it will take hundreds, if not thousands, of years for bacteria and the enzymes that they produce to evolve to a point where they can break down the long chains of molecules that compose plastic. As a result, the accumulation of plastic is causing serious problems in the environment.

According to Dr Margaret Brennan Fournet, a foremost authority on materials science and leader of project BioICEP, there are microplastics in the air we breathe, the water we drink and the food we eat. Scientists have even found them in remote mountain ranges.

“People may need to start using monitors, not just to measure air quality, but to measure the level of microplastics in the atmosphere – similar to how Geiger counters are used to measure radiation,” she said.

“It’s been suggested that people are ingesting a credit card-sized amount of plastic every week. These scientific results are only starting to come out now and every few months we’re hearing new, even more staggering results.”

Using an innovative triple action process, Dr Brennan Fournet and the BioICEP team will attempt to accelerate the degradation of traditional plastic and turn it into biopolymers, which can be used as natural biodegradable replacement plastics.

“In essence, we’ll be tacking in the mixed plastic waste at one end, treating it with bacteria and enzymes, recovering the molecules, fermenting them, and turning them into new bioproducts,” she explained.

In many respects, plastic’s strength is actually its weakness. Its sheer versatility and high resource efficiency has enabled innovations across many sectors, allowing for the development of new products and solutions.

Plastic has completely revolutionised how food is bought, stored and consumed. For example, beef that has been vacuum packed in multilayer plastic can last up to 45 days on the shelf. By extending the shelf life of food, food waste is kept to a minimum.

“It is near-impossible to buy food to feed your family in the supermarket without encountering some form of plastic,” Dr Brennan Fournet said. “Its myriad applications and low production costs has ensured its indispensability to modern living.”

With dependency on petroleum-based plastic showing no sign of abating, the race is on to create viable, ecological alternatives that won’t negatively impact companies’ bottom line or affect the consumer adversely.

“Our ultimate goal is not to change consumer behaviour as this alone isn’t sufficient to solve the problem. Instead, we’re trying to target manufacturers and give them a better option that won’t cost more and isn’t harmful to the environment,” she explained.

Plastic: In need of a rebrand

It’s not just individuals who are looking for ecological solutions to the global plastic pollution crisis either. With more than one million plastic bottles being produced every minute, soft drinks manufacturers are under pressure to make their packaging more sustainable.

Companies like Coca-Cola have already started incorporating recycled PET, a plastic resin and member of the polyester family, into their packaging. Their goal is to make 100% of their packaging recyclable by 2025.

While other plastic substitutes, such as glass or sugarcane, are available to manufacturers, they can be significantly more expensive to produce and energy intensive to transport - resulting in a higher net carbon footprint.

According to the Athlone-based researcher, plastic is in need of a total rebrand: “It isn’t public enemy number one – or at least it doesn’t have to be. At the end of the day, we’re extremely reliant on it – there’s no escaping that. We do, however, need to be more considered in our approach to how we make and recycle it.”

While bioplastics research is still emerging and as of yet most materials don’t contain the performance properties required to ensure that they can be fully biodegraded, project BioICEP is still a much-needed step in the right direction.

“These new plastics are not going to cause the problems that traditional petroleum-based plastics have caused because they will be easy to break down and recycle post use,” Dr Brennan Fournet finished.

The €5 million project, which will span four years, commencing in February 2020, will be led by Athlone Institute of Technology, a third level institute in the heart of Ireland with a significant expert knowledge base and strong industry connections.

“Our researchers have long been at the forefront of plastics research and development and have been working on solutions to the global crisis of plastic pollution for more than 10 years in association with Enterprise Ireland,” Dr Declan Devine, director of the Materials Research Institute, explained.

The BioICEP approach to tackling mixed plastic waste has the potential to circumvent many of the current challenges associated with plastic packaging materials which will be essential in resolving current environmental damage.

“Only two projects got selected for funding across Europe for the plastics bio-degradation EU-China call in 2019, BioICep was one of them,” Dr Sergio Fernandez-Ceballos, National Delegate and Contact Point for Horizon 2020 Industrial Technologies in Enterprise Ireland, said, adding: “This success is reflective of the talent and focus of Ireland’s research and innovation community, punching above its weight in this very relevant area.”

Two other Irish third level institutes will partner on the project: Trinity College Dublin and Limerick Institute of Technology. Nine countries - totaling 15 partners - have been selected to participate in the pan European Chinese research collaboration, each of whom represent different mixed plastic pollution environments.

Athlone Institute of Technology is a vibrant, contemporary institution distinguished by academic excellence in teaching, learning and research. The institute has enjoyed considerable success in recent years, most notably being awarded The Sunday Times ‘Institute of Technology of the Year 2020, 2018 and Runner-Up in 2017. The institute also tops Ireland’s official league table for research and has been listed in U-Multirank’s ‘Top 25 Performing Universities in the World for Interdisciplinary Research’ in 2018 and 2019. Athlone Institute of Technology has ranked number one for student satisfaction nationally for six consecutive years 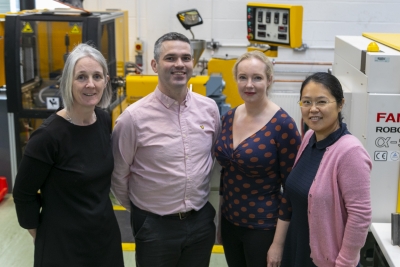