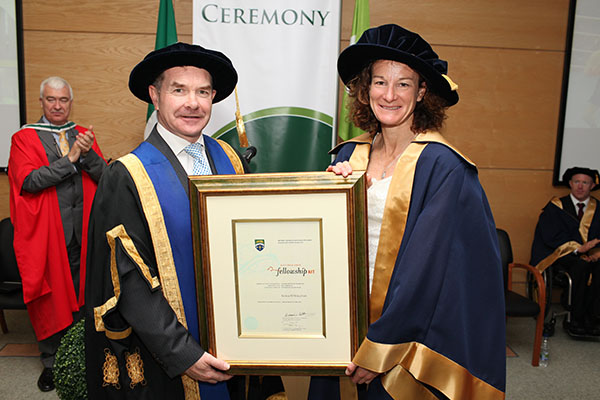 Ireland’s most accomplished sportswoman has enjoyed an illustrious athletics career: a career which led her to the very pinnacle of her sport and which allowed our small island nation on the edge of Europe ‘to dream the impossible dream’. A daughter of Cork who showed great athletic promise as a school girl, Sonia went on to follow in the footsteps of some of Ireland’s greatest athletes in taking up a scholarship at the prestigious Villanova University in Pennsylvania in the United States. This set her on a path leading to her admission into the pantheon of the greatest track and field athletes of all time.

During her career, Sonia set track and field records over an astonishing range of distances, both nationally and internationally. She set a 3000m European record as well as 2000m and 2 mile world records. From Stuttgart to Sydney, and Gothenburg to Marrakech, Sonia’s legend preceded her, as talk of her achievements was limited to no language, and uttered in every tongue. At home, Sonia set national records over 800m, 1000m, 1500m, 2000m, 3000m, 1 mile, 2 miles, 5000m, 10000m and over the half-marathon. Indeed, her world record for the 2000m and all of her national records remain unsurpassed to this day.

Sport both built and revealed the strength of Sonia’s character. Despite being the favourite to take gold in the 5000m in Atlanta in 1996, Sonia’s life took an unforeseen turn when illness robbed her of Olympic glory. However, as American author William Arthur Ward once observed while ‘adversity causes some people to break, it causes others to break records’. Sonia was down but not out. Her character proved as resilient as her talent was brilliant and when she travelled to the Sydney Olympics four years later, she claimed the silver medal in the 5000m.

Notwithstanding her monumental achievements, Sonia has always countered the trends of arrogance which often pervade the higher echelons of some sports. Honourable and dignified in her rare defeats, and unassuming and self-effacing in her numerous victories, Ireland has taken great pride in Sonia’s character and athleticism. It is only fitting that, in 2004, she was named as Ireland’s most important living sportsperson, and that just this week, she had the honour of carrying the Olympic torch in Dublin. It is also fitting that she will lead the Irish Olympic team as chef de mission in London later this summer.

As Athlone Institute of Technology stands on the precipice of the endowment of a world class indoor athletics stadium, it is the perfect time and opportunity for us to honour some of the all-time greats of Irish sport. If it is true that the purpose of higher education is to advance the ideals of mankind, then it is only right that higher level institutions recognise individuals who, through their endeavours, have advanced those same ideals. Throughout her career, Sonia O’Sullivan has always promoted the ideals of integrity and good sportsmanship. Her diligence and relentless dedication are an inspiration to us all and we are humbled and delighted to welcome her to the institute today.

Sonia, over the years, your passion and unassuming genius has enlivened the spirit of our nation. After dreaming ‘the impossible dream’, you attained the ‘unreachable star’ in Olympic glory. For your remarkable achievements – but more than that for the pride and joy which your talent has given us all – on this great day, the institute confers upon you its highest honour.