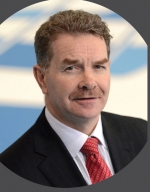 Prof. Ciarán Ó Catháin is the President of Athlone Institute of Technology (AIT), the leading third level institution in the Irish Midlands, a role he has held since 2000. He is a graduate of Trinity College Dublin and Dublin Institute of Technology and holds a Doctorate in Management from the University of Ulster. He is a visiting professor at the Capital University of Economics and Business, Beijing and he also holds honorary professorships at both Beijing Union University and Beijing Information Science and Technology University, where he is also a member of the academic committee for the university. He is an academic advisor to the University Malaysia Perlis. Professor Ó Catháin also holds honorary Doctorates in Management from University Malaysia Perlis and Management Science University in Kuala Lumpur.

Prof. Ó Catháin has spent his career in numerous leadership roles across academia, tourism and indeed sport at a local, national and regional level. He is former Chairman of Technological Higher Education Association, the representative body of all Institutes of Technology in Ireland, and has previously served as Chair of the Council of Directors of the Institutes of Technology in 2002. He has served as both President (1994-1997) and Vice-President (1997-2000) of the European Hotel and Tourism Schools Association.

Committed to the value of regional development, Prof. Ó Catháin has championed the commercial, social and cultural development of the Irish Midlands. He was Midlands Gateway Ambassador in 2012, and served as President of the Midlands Gateway Chamber for the towns of Athlone, Tullamore and Mullingar in 2008-2009. As Chair and Co-patron of the Commission for Justice and Social Affairs in the Diocese of Ardagh and Clonmacnoise, he has guided initiatives on inter-culturalism and fair trade.

Passionate about athletics, Prof. Ó Catháin is a former President of Athletics Ireland, the national governing body for athletics in Ireland, having previously served as Vice President and Chair of its Finance and Risk Committee and is also a former member of the executive board of the Olympic Council of Ireland.