Conferring of Distinguished Fellowship on Mary McAleese, President of Ireland 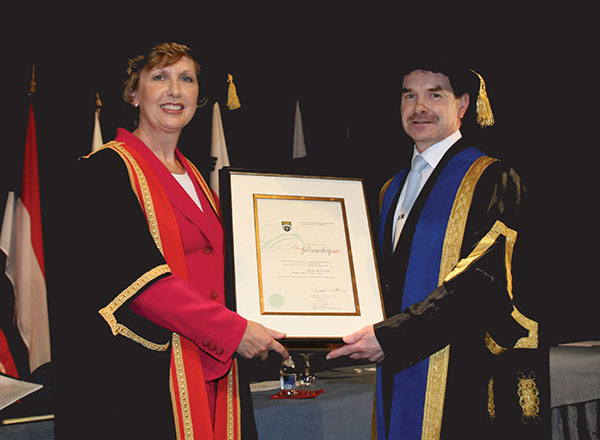 President, distinguished guests, friends, it is my great pleasure to extend a warm Midlands welcome to you for this historic occasion in the Institute. It is a great source of honour for me to confer our first Distinguished Fellowship today. It is also a milestone day in Irish higher education as it marks the eve of the introduction of the Institutes of Technology Act. This will see AIT move from the Department of Education and Science to the Higher Education Authority.

We are here to pay tribute to President Mary McAleese, recognising the outstanding contribution she has made to Ireland. Hers has been a presidency and career engaged with ideals, openness, tolerance, representation and noble causes. Ireland has changed dramatically since 1997, yet in President McAleese, we have a head of state who reminds us of the best of our heritage and the enormity of possibility which lies within us as a nation.

While the Constitution does not permit the President to have policies, the presidential theme of ‘building bridges’ is one that has resonance for us as a country divided into north and south. It also holds considerable appeal for us in Athlone, divided as we are between two counties and two provinces by the great River Shannon. Apart from the analogy of linking two places, the bridge idiom also exemplifies the sense of possibility and mobility that typifies our age. Mary McAleese’s own career as barrister, academic, journalist and head of state, highlights the fruits of commitment to the common good, courage and sheer hard work.

While Ardoyne in North Belfast will always have first claim on her loyalties, this part of the world, in particular Croghan in Co Roscommon, has left no small impression on her life. The home place of Mary’s father, Paddy Leneghan, the county continues to hold special appeal for the President and her family. At the launch last year of a history of St Michael’s Church, Drumlion, Mr Leneghan said that many of his early memories were of growing up in Carroward, his days in Woodbrook school and walking to Mass in Drumlion. This beautiful part of the world was captured to perfection in David Thomson’s classic book Woodbrook, in much the same way that John McGahern paid homage to his beloved Leitrim.

It is possible to trace the open-mindedness of Mary McAleese to the tolerance espoused by her parents, when as a young girl she mixed easily with children and neighbours from both sides of the religious divide. While clearly raised in a Nationalist tradition, she learned to have respect for those who held opinions and beliefs contrary to her own. Those childhood experiences have stood her in good stead in the cross-border work she has performed over many years.

The School of Law at Queen’s University Belfast was home to Mary Leneghan between 1969 and 1973. Those were turbulent years in Belfast with sectarian violence increasing in intensity and impacting upon the Leneghan family on a number of occasions. After she graduated with an honours degree in law, Mary qualified as a barrister and in the process became one of the very few Catholic women called to the Bar. The period was marred by the failed Sunningdale Agreement, the Ulster Workers’ Council Strike and the Dublin and Monaghan Bombings, events which cast a long shadow over the country.

In 1975, Mary McAleese – now married to Martin – was appointed Reid Professor of Criminal Law, Criminology and Penology at Trinity College Dublin, where she succeeded Mary Robinson. She was the youngest ever person appointed to the post, at the tender age of 24. Settling into Dublin, she quickly became involved in movements seeking change, such as the Campaign for Homosexual Law Reform and the Commission of Inquiry into the Irish Penal System.

New challenges were ahead, however, and in 1979 Mary moved from the world of academia into journalism and broadcasting. Her period in the current affairs department at RTÉ, working on programmes like Frontline and the ground-breaking Today Tonight, was marked by a troubled spell in Irish life, most notably with the H-block hunger strikes. In 1981, Professor McAleese returned to Trinity College and was appointed registrar of the School of Law. Her experience in broadcasting continued to be called upon, however, and she worked part-time for RTÉ over a number of years, contributing on a diverse range of issues such as politics, religion and the arts.

A return to Belfast and to Queen’s University beckoned in 1987, when Mary McAleese became the Director of the Institute of Professional Legal Studies. Yet again her talent in this prestigious role was recognised and she received numerous invitations to travel to various parts of the world as guest lecturer. Her leadership skills were rewarded in 1994 when she became the Pro-Vice Chancellor of Queen’s, the first woman and only the second Catholic to hold the position.

The continual seeking of new challenges and her unbounded energy and appetite for large scale projects, was to see a further change in direction in 1997, when Mary McAleese ran for President. Emily Dickinson sketches what must have been the mood of that time elegantly:

We never know how high we are

Till we are asked to rise

And then if we are true to plan

Our statures touch the skies

Indeed the qualities which saw her achieve such great success in a variety of different roles were recognised by the Irish people and they responded by electing her as the eighth President of Ireland. Inaugurated on Armistice Day, the new President – and the first from Northern Ireland to hold the post – chose ‘building bridges’ as her theme. It is one that she had exemplified in her life and career to that point, and now as first citizen, she had an opportunity to provide leadership in this sphere to an even wider audience.

During her presidency, Mary McAleese has been an articulate, impressive and sophisticated representative of Ireland on the world stage. She has communicated the great success and wealth – economic and social – of our country to an international audience. In 2003, we were privileged to witness at close hand how remarkable an ambassador she is for Ireland, when AIT was part of a presidential trade mission to China, the largest of its kind with 180 organisations represented.

From trade visits to missions of discovery, hers has always been a voice worth listening to. After the dreadful nightmare of September 11th, President McAleese reflected all our horror when she spoke of the ‘volcanic atrocity’ which was ‘an attack on all humanity’. Her words set the international mood (Zeitgeist) during those dark days.

At other times, she has asked us as a nation to hold up a mirror to ourselves, challenging our self-perception. The barrister who agitated so successfully in her early career for reform and for equality, called on us to look at our treatment of international people in our community. Had we reneged upon the openness of our céad míle fáilte to those who happened to be different to ourselves? The silent torment of youth suicide and the too-frequent horror of carnage on our roads have also inspired the President to raise these issues in the national consciousness.

A leader should be a model and in our own way, AIT has emulated the example of the President. ‘Only connect’ said E.M. Forster. A basic tenet of the development drive of AIT has been to connect and build relationships at local, national and international levels, with our students and their families, with schools, with businesses, with public bodies. President McAleese herself has assisted us in our drive to make international connections, an area in which we have blazed a trail. While relationship building is never complete, AIT’s pre-eminence in networking is evidenced by our outstanding success in the recent Strategic Innovation Fund initiative, when our applications with other third level colleges ensured our participation in seven network projects worth €17 million. Our recent memorandum of understanding with DCU provides a new model for the sector, and a bridge between the urban and the rural from which we hope to derive benefits for our students and the region

We are not alone in this Institute in recognising the greatness of Mary McAleese. Now the longest-serving female elected head of state, she has been ranked the 55th most powerful woman in the world by Forbes. Her list of honours is truly impressive and includes awards from the universities of Notre Dame, Queensland, Aberdeen, Bristol and the Royal College of Surgeons in Ireland, to mention just a few. We are truly grateful President McAleese that you have honoured us today by becoming the first recipient of a Distinguished Fellowship from Athlone Institute of Technology.

A critical element of our Distinguished Fellowship is that the recipient has a record of distinguished service in the academic or professional field, and provide motivation and inspiration to the general public. President McAleese, in every sense you exemplify the spirit of service, generosity, leadership and inspiration which we wish to recognise in this award. In truth you are setting the yardstick.

As someone so intensely involved in education as you were, it is fitting that as the only third level institution in the Midlands, we should honour you in this way. It is my great pleasure now to confer President Mary McAleese as the first Distinguished Fellow of Athlone Institute of Technology.