Head of School of Humanities, AIT 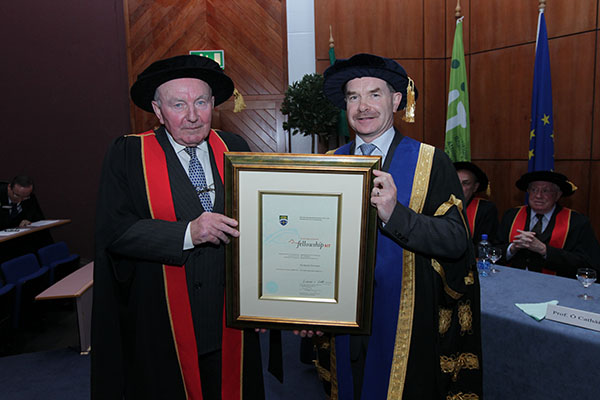 ‘Be silent always when you doubt your sense;

And speak, though sure, with seeming diffidence.’

Whatever else one might say about it, ours is not an age of diffidence, seeming or real. On the contrary and in the words of Shakespeare, ‘the isle is full of noises’. He wasn’t talking about this isle but he could have been! We tweet and twitter endlessly, and if we are to believe the statistics, the Irish more than most.

Those who operate in the public realm and particularly in politics are expected never to be at a loss for a word. They are trained to answer even if they cannot. Ignoring questions has become an art form. The primary criterion for media success is the ability to keep going. The worst that can happen is silence.

Yet diffidence or reticence is what strikes one in Mr Patrick Cooney. A politician of eminence, he has served variously as Minister for Justice, Minister for Posts and Telegraphs, Minister for Transport, Minister for Defence and Minister for Education. He has also served in the Seanad as Leader of the Opposition and as an MEP.

A law graduate of UCD where he was awarded a BA and an LLB, his first public office was in 1967 as a member of Westmeath County Council. In all, he has served this region for some 27 years. I repeat the word ‘served’ because it fits. The service of the public is an honourable and fortunate profession. It is good to remember and reassert this at a time when the public service is routinely derided and discredited.

Furthermore, the value of action taken in the public service can truly be judged only in the longue durée. Mr Cooney’s record stands as evidence. The far reach of some of his actions, their relevance and reverberation some thirty years later, more than justifies the long-term approach that is a primary justification for the public realm.

Another feature of our media-blighted age is the willingness to take credit for achievements that may not be one’s own – to bathe in whatever reflected glory is available. Of late and sadly, this trait has been more evident in its ugly sister: the failure to take the blame, to spread it like a copious carpet under which everything may be conveniently swept. ‘We are where we are’ indeed.

I assumed that Mr Cooney had in some way been involved with the establishment of AIT and asked him about this when we met. He told me that he was not involved, had nothing to do with it in fact. Mr Cooney sticks to the facts.

He did tell me however – and if he hadn’t, my colleagues in the Department of Hospitality, Tourism and Leisure Studies most certainly would have – that he played a part in winning a School of Catering for AIT. Cajoled by the then Director, Dr David Fenton, to assist in reversing an unfavourable decision, Mr Cooney convinced the Minister for Education of the time, John Boland, of the merits of Athlone as a new centre for hospitality studies.

The minister made the decision; Mr Cooney made the case. The designation of the college as a centre for catering studies was of crucial strategic import. Some 30 years later, the institute is in possession of a €10 million state-of-the-art facility. That would not have happened without Mr Cooney.

Almost inescapably, the record of those who operate in the public realm may be distorted by the mood of the times. Mr Cooney’s period as Minister for Justice was coloured by the viciousness of IRA activity at that time.

However, as Minister for Justice, he introduced the first significant reforms in family law since the foundation of the State. The Family Home Protection Act prevented delinquent husbands (for the most part, I am sure) from selling the family home without the permission of their wives.

The Maintenance of Spouses and Children Act introduced the concept of the attachment of earnings, allowing those same and other delinquents to be pursued in relation to their familial responsibilities, not just in Ireland but also in the UK, through a negotiated mutual arrangement.

These pieces of legislation, which were greeted with outrage at the time, greatly enhanced the status of women in Irish society. I can only imagine the added importance today, in this era of negative equity, of the protection they afford.

Deploring the politicians of his time, Yeats bemoaned the fact that ‘the best lack all conviction’ while ‘the worst are full of passionate intensity’. Mr Cooney was clearly a strategic thinker and somebody who was not easily diverted from the task in hand. His time as Minister for Education in the 1980s was one of considerable challenge and he did not shirk his role in implementing difficult policies with resultant union unrest. In his ministerial career, Mr Cooney upended Yeats: he turned his passion to good effect and he certainly did not lack conviction.

In many ways, what strikes one about Mr Cooney is an eloquence of restraint. He has clearly been well able to innovate, to advocate and to implement. He exemplifies what in my view is best about the Midlands: a degree of modesty and subtlety, of courtesy and discretion; again, of reticence.

It is a particular pleasure to present Mr Cooney for this honorary fellowship: to celebrate the timeless importance of that for which he stands: what might be summed up in one word: credibility.

The traits he exemplifies are not often lauded. They were never more needed.

I am very pleased that AIT, in honouring Mr Cooney, promotes these values.