Head of the Business School, AIT 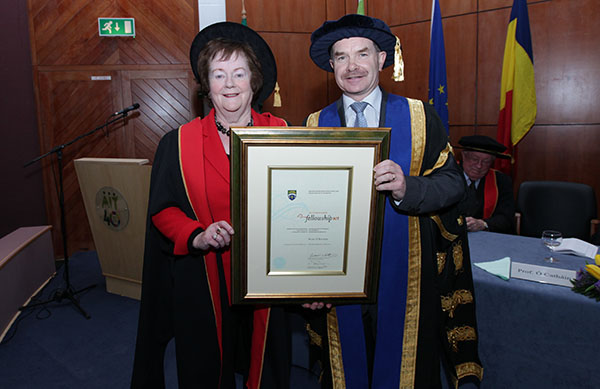 Mary Lenihan was born in Athlone, and educated at St Peter’s Athlone and Loreto Convent Bray. She went on to take her BA degree at University College Dublin. She worked in business for a time. She then took a higher diploma in education at St Patrick’s College, Maynooth. After that she taught history at St Joseph’s College, Summerhill before embracing a career in politics

She married Enda O’Rourke and has two sons, Feargal and Aengus, together with six grandchildren. Both her sons are here today. Mary followed a strong family tradition when she entered politics. Her father Pádraic – or PJ – served as a TD for Longford-Westmeath from 1965 to 1970. Before that he had been manager of Gentex, the cotton factory, and later proprietor of Hodson Bay Hotel.

Her brother Brian, then TD for Roscommon, was also Minister for Education at the time. Together, father and son were influential in the choice of Athlone as the location for the new Regional Technicial College in 1970.

Another brother, Paddy Lenihan Junior, was a councillor in Roscommon for many years. Two of her nephews, Brian and Conor Lenihan, were ministers in the last government. Mary has a long-established relationship with Athlone Institute of Technology. She served on the governing body of the then regional technical college from 1974 to 1979 and was chairperson from 1976 to 1979.

Her fertile mind ensured that she was a driving force behind many developments of the time, including availing of the Arts Council’s joint-purchase scheme to establish the art collection. Throughout her political career Mary has continued to be a strong advocate for the institute, always available to advise and help wherever and whenever she could in matters large or small.

Her enduring contribution receives well-merited recognition here today in the form of this distinguished fellowship.

Mary began her public career in local politics, serving on Athlone Urban District Council and on Westmeath County Council . She was elected to Seanad Éireann in 1981 on the Cultural and Educational Panel and to Dáil Éireann for the Longford-Westmeath constituency in 1982.

She became minister for education in 1987. Simultaneously her brother, Brian, was Minister for Foreign Affairs: it was the first time that siblings had sat together in an Irish cabinet. She was not the first woman to be a cabinet minister, but she was one of the first.

In November 1991, Mary became Minister for Health, and in 1994 deputy leader of her party, Fianna Fáil. From 1997 to 2002 Mary was Minister for Public Enterprise.

From 2002 to 2007 she was leader of the Seanad, where she was the driving force behind radical proposals for its reform. Returning to the Dáil after the 2007 general election – in which she received her highest-ever vote – she was an authoritative and outspoken chairperson of the Joint Committee on the Constitutional Amendment on Children’s Rights.

For Irish people in general Mary O’Rourke, after three decades in the Oireachtas, is universally known and respected as one of the most articulate and engaging personalities in public life.

A fine public speaker, her frequent media contributions are shrewd, witty and fluent.

For the people of her constituency, especially Athlone, she has been ever a robust and totally committeed public representative. She has been a persuasive advocate for their welfare. She has understood their concerns and problems. She has kept closely in touch with every facet of community activity. And she has been a shrewd judge of what goals are realistic and what are not.

Throughout her career, she has been progressive, honest and brave. Her loyalty to her people has been without question, and it has been returned by them to her with a huge measure of respect and much affection.

Mary was quoted in a recent interview as planning to write a book. Be it her political memoirs or her novel, it promises to be a lively read!

In conclusion I might mention an anonymous expression which I came across the other day whilst researching for this event in terms of reflecting on a life full of achievements; that while advancing age can wrinkle the face, it is only a lack of enthusiasm which can wrinkle the soul. That is certainly not the case for Mary O’Rourke.