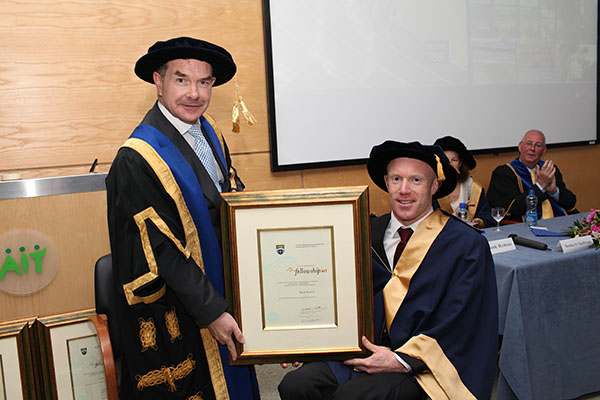 First of all, I’d like to welcome Mark’s family and friends here today; parents Denis and Carmel, granddad Mike, sisters Nicola and Laura, and his brother Robert. Another sister, Sarah, is in Melbourne and would love to be here.

I’m honoured to have the opportunity to speak about Mark today. Mark Rohan was born in 1981, the third of five children of Denis and Carmel. He grew up (and still lives) in Ballinahown, Co. Westmeath. Of course, Mark has interests other than sports, such as music and reading, but, as Mark told me said himself, really, it’s all about sport, so that’s where I will focus.

Well before his teenage years, Mark showed a keen interest in sporting activities, playing football with the local GAA club in Castledaly. He joined secondary school in the Marist College and became a key player on the school team. He also played soccer with Ballinahown and, in 1999, he was awarded Player of the Year.

Just before that, in 1998, Mark finished secondary education and commenced an apprenticeship with the ESB. He continued to play club football and at the age of 18, his skills were spotted by county football selectors and soon he was playing U21 Gaelic football with Westmeath.

That was not to last to very long however, as 2001 was the year of Mark’s accident. His life had taken an entirely new course and a lot now depended on Mark’s character and resilience and that of his family and friends. I’m sure Mark will agree that the staff in St Michael’s Hospital, Dun Laoghaire were fantastic and he was given every assistance and encouragement through those long and difficult months.

As soon as he was able, Mark began to explore what he could turn his character and changed abilities to. Straight away, he took up archery and in 2002, not even a year after his accident, he competed in the Glasgow Spinal Games, winning a gold medal. In 2004, he managed Castledaly’s soccer team and they reached the county’s cup final. He realised though, that sport from the sidelines was not for him and he needed to be in the midst of the action.

He also began playing basketball and represented Ireland at the European Games in Lisbon in 2005. By 2007, he was captain of the Irish wheelchair basketball team and led them to another European championships in Latvia in 2009. He undertook academic pursuits too, and describes attaining a BSc in Sports Management in UCD as one of his most satisfying achievements.

Mark didn’t confine himself to just one sport though. He took a break from basketball, in between European championships, to try his hand at tennis. True to form, he had considerable success at this, winning the B Division Wheelchair Tennis Championships in Montreal and Nottingham in 2008. Around this time, another significant event occurred; Mark acquired his first bike and a whole new world opened up for him. He felt a freedom at this sport unparalleled in any of the others and soon began devoting most of his energies into paracycling.

Within two years, he represented Ireland in paracycling at the World Championships in Italy. He must have learned a lot there because the following year, 2010, and now a ‘carded’ athlete, he had a series of amazing successes against the world’s best paracyclists, winning World Cup gold medals in Dubai and Kent, and European silver in Spain. He went on to take gold in the Paracycling World Championships in Canada, a first for Ireland and perhaps the greatest sporting highlight in Mark’s career.

Mark competes in road races and time trials and dominates in both disciplines. However, he can never afford to rest on his laurels as, often, mere seconds separate him from other world class rivals from Israel, Switzerland, Belgium, France and Austria. With a world champion’s jersey on his back, the training intensified and in Denmark in 2011, Mark successfully defended his World Championship titles in both time trial and road racing. On the way to those 2011 acolades, he defeated all opposition in races in France, Australia, Spain, Canada, Switzerland and Belgium; truly a remarkable year.

Back home, Mark’s successes were receiving increased recognition. The ESB gave him a year’s leave and he earned sponsorship from Renault, Allianz and Invacare and he was honoured by a number of organisations. Westmeath County Council gave him the Cathaoirleach award, Athlone, a Person of the Year Award, and he won the Westmeath Independent/Hodson Bay Sports Award. He also received the Canon Hayes Achievement Award and internationally, he became the first ever Irish winner of the International Paralympic Committee’s Athlete of the Month award. Those awards are given for more reason than Mark’s sporting successes.

He gives back to sport and the community as much as he gets from it. He is always willing to visit schools, encourage other budding athletes, and assist in any way people recovering from serious injury.

This year is an Olympic and Paralympic year and accordingly, there is no World Championships to be defended. Sky has joined his list of sponsors; a considerable endorsement indeed. All Mark’s attentions are focused on September in London and his competitive programme is well underway. He trains 20-25 hours a week, and has added swimming into his routine. Two weeks ago he took gold in a World Cup time trial race in Rome and last weekend, riding on just training wheels, he took silver in a Swiss European event and gold the following day in the road race.

Mark, well done and we wish you continued success.