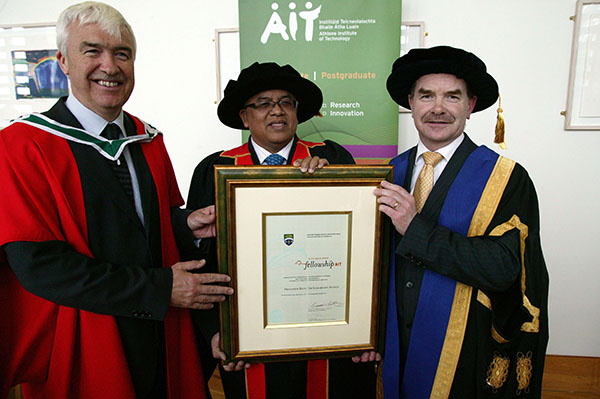 Professor Dr Kamarudin Hussin started his academic career as a chemistry lecturer in Universiti Sains Malaysia, Penang, in 1982. Some three decades on, he continues to be a prolific academic, teaching numerous courses in chemistry, materials science, metallurgy and polymer. In addition, he is the author of more than 20 books and close to 300 research papers.

Professor Kamarudin climbed the ranks from being programme chairperson to deputy dean, chief warden of several residential colleges, dean, and director of USM’s engineering campus. When Malaysia’s four technical university colleges were founded in the 2002, Professor Kamarudin was appointed as the first Vice-Chancellor of one of them, which is now known as UniMAP.

Under Professor Kamarudin’s stewardship, ‘practical-oriented’ curricula were developed and implemented. While much care is given to producing graduates who are competent in both the theoretical as well as practical aspects of engineering, Professor Kamarudin and his team built an academic system whereby qualities such as leadership teamwork, and communication skills are embedded within the curriculum. As a result, close to 90% of UniMAP’s graduates are now employed by industry within six months of graduation.

Apart from successfully offering its unique brand of academic programmes, Professor Kamarudin wants UniMAP to grow its research activity. His own work involves the morphology and thermal and mechanical properties of materials such as palm ash, palm slag, and printed circuit board wastes to be used as brake pads. The uses of recycled plastic fibre is another of his areas of interest.

The benefits of such a vision are apparent. Although only nine years old, UniMAP is ranked no.2 among non-research universities in Malaysia. In terms of being awarded research grants from the Malaysian Ministry of Science, Technology and Innovation, UniMAP is at no.8 out of 20 local universities. Professor Kamarudin himself is one of the recipients of a 1.5 million Ringgits (the equivalent €340,000) grant from the King Abdul Aziz City for Science and Technology Institute for research in green cement concrete – an initiative that generated three separate patents – in Malaysia, Saudi Arabia and the United States.

Furthermore, UniMAP researchers have won hundreds of gold, silver and bronze medals in more than 20 exhibitions and competitions held in Malaysia and abroad, including in Europe.

Although academic and research matters represent the daily life of a university, to the Vice-Chancellor, there are other aspects that require his attention. Professor Kamarudin plays an instrumental role in ensuring that the university’s ICT system compares well with that of established institutions. So successful has this undertaking been, that although located in a relatively remote part of Malaysia, UniMAP’s ICT configuration won the Prime Minister’s Award, and is ranked second amongst local higher learning institutions, and no.14 in Southeast Asia.

With its current accomplishments on hand, UniMAP is poised to join the ranks of respected universities in the international arena. Indeed, internationalisation has been one of Professor Kamarudin’s main agendas since the early days of the university. He fosters friendship with colleagues from around the globe, including from Thailand, Indonesia, China, Japan, Korea, Yemen, Jordan, Australia, United Kingdom, Czech Republic, and of course, Ireland.

These collaborations include student and staff exchange and research. Due to UniMAP’s track record in successfully helping Yemeni students acquire the right level of competency in preparation for university education, Professor Kamarudin has been invited by the Yemeni government and the Bughsan Group from Saudi Arabia to help set up a learning centre in Yemen to continue this noble cause. To add, the Saudi Arabian Buraydah College has recently asked for UniMAP’s curriculum to be introduced over there. With his first hand experience at starting education establishments from scratch, and with UniMAP’s expertise in the construction of the appropriate physical and non-physical academic and research infrastructure, this undertaking should be a very successful one.

Apart from the academia, Professor Kamarudin is actively involved in the Malaysian Drug Prevention Society since 1990. He has held a number of related positions such as Committee Member and Secretary of the National Drug Training Bureau, and Vice-President of the National Anti-Drug Council. He is currently Chairperson of the Anti-Drug Education Bureau of Higher Education Institutions. In the last few years, he has co-authored six research papers about drug abuse amongst institutions of higher learning in Malaysia and Indonesia.

Since his student days, Professor Kamarudin has taken a keen interest in the Malaysian Reserved Officers Training Unit (ROTU) and then later, the Malaysian Territorial Army. For that, he has been honoured as a ‘Regimental Commander 509’, and later awarded the ‘Knights of the Armed Forces’ Medal and the ‘Medal of Heroism in the Army’ by the Yang Dipertuan Agong, King of Malaysia.

As a frequent speaker for the Malaysian National Civics Bureau, he regularly inspires thousands of youngsters to dedicate their lives for the good of the country. For all the services rendered to UniMAP, the state of Perlis, and Malaysia, Professor Kamarudin has been bestowed ‘Dato’ship’ – an honour given by the Regent of the state of Perlis to those who have fulfilled their duties beyond expectation.

I am delighted to confer this Distinguished Fellowship upon Professor Kamarudin. He is the first international recipient of AIT’s highest honour. The Vice-Chancellor has been a good friend to me in our growing relationship with UniMAP, and I know that he will be a wonderful ambassador for this institute and the values shared by our respective institutions.