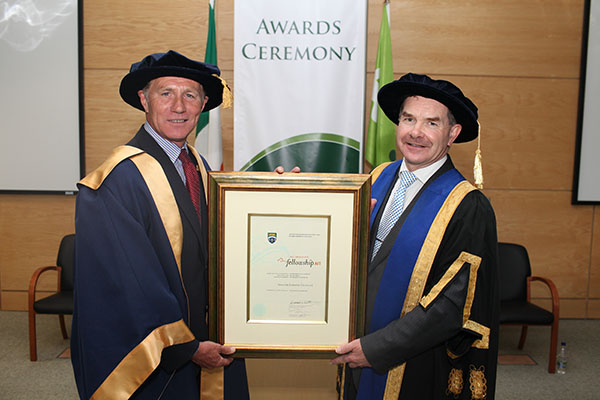 Eamonn Coghlan was born in Dublin, the fourth child of Kathleen and Bill Coghlan and grew up on Cooley Road, Drimnagh. He is married to Yvonne, they have four children, Suzanne, Eamonn Jr, Michael, John and two grandchildren, Amber-Joan and Ethan.

He was educated and developed athletically in Dublin until he was 18 years of age.

He received an athletics scholarship to Villanova University based on his exceptional ability as an underage athlete. The decision to move to the USA was not an easy one for a young Irishman, especially as he had already met his future wife, Yvonne. Legendary Villanova coach James ‘Jumbo’ Elliott lay waiting to put the finishing touches on a future champion who had been groomed by his lifelong coach Michael ‘Gerry’ Farnan.

Eamonn had a prolific career in college athletics in the USA, where he won individual NCAA titles both indoor and outdoor, while also winning multiple team relay and medley titles. He also made an impact academically and graduated with a Bachelor of Science degree in Marketing and Communications.

Full-time athletics was to dominate Eamonn’s life after college. Despite less than ideal preparation, Eamonn experienced deep disappointment in two Olympic Games finals with fourth place finishes when everybody, including Eamonn, knew that medals were within his ability range on both occasions. These were low points for a man who had the tools and attitude for success.

However, redemption and deliverance came at the inaugural World Athletics Championships, hosted in Helsinki in 1983. Eamonn again found himself on the start line in a major championship final. This time there would be no question as to who the best athlete in the field would be. After a tactically perfect race, Eamonn could afford to begin celebrations 120 metres before the finish line as he became the first World 5000m champion!

As an indoor athlete Eamonn had no peers, he was simply the best in the world. Known as the ‘Chairman of the Boards’ and ‘Master of the Mile’ he was virtually unbeatable. He won a staggering 56 races in succession. He claimed success on seven occasions in the world’s biggest indoor mile race, the Wannamaker Mile. He also managed to break the world indoor mile record three times, the 2000m indoor record once, win European championship gold and silver medals and run 78 sub-four minute miles during his amazing career.

Eamonn always projected a good image of Ireland on the international stage. He even managed to run foul of the mighty BBC for wearing his promotional Discover Ireland t-shirt in interviews. His media work has highlighted that he is still a student of athletics with a skill for correctly predicting results, while his involvement in coaching demonstrates his will to transfer his knowledge and experience to the next generation of Irish athletes.

Development of Irish athletics has always been close to Eamonn’s heart. He was headhunted as the first CEO of athletics in Ireland by the then Minister for Sport, Frank Fahey. It was an ill-fated time and the then hierarchy of athletics in Ireland was not equipped to embrace the energetic, educated and progressive Coghlan. He took stock again and found a new challenge.

At the age of 41, Eamonn was refocused and was again at the cutting edge of mile running. He was now attempting to be the first man over 40 years of age to run a sub-four minute mile. In 1956, Roger Bannister and John Landy battled to be the first men under the four-minute barrier ever. British athlete Dave Moorcroft was to be Eamonn’s John Landy. During his assault on the four-minute barrier, on an almost weekly basis, despite injury, Eamonn broke the world masters mile record. This was not enough though and finally, on 20 February 1994 in Boston he ran 3 minutes 58.15 seconds to become the Roger Bannister of his era. Only last week, and eighteen years later, the second man in history, over 40 years of age broke the four-minute barrier.

As Director of Fundraising and Development for the Children’s Medical Research Foundation of Crumlin Children’s Hospital, Eamonn made another massive contribution to Irish society, this time outside of the sporting arena.

In May 2011, the new Taoiseach Enda Kenny nominated Eamonn to sit in the Seanad. Eamonn is Chairman of the High Performance Committee in the Irish Sports Council and coaches leading middle distance athletes with aspirations as high as his own achievements.

Eamonn has been more than generous with his time and advice to AIT as athletics facilities have been planned and developed over the past five years on our campus. He also launched our first hosting of the HSE Community Games National Finals, acted as guest speaker at the AIT Sports Awards and officially opened our outdoor athletics track. On Eamonn’s most recent visit to AIT, he was simply a proud father as he watched his youngest son John win the intervarsity 5000m title. John and Eamonn are one of the very few father and son combinations to both have both run sub-four minute miles.

I am confident that when the great names of world athletics are discussed far into the future, the name Eamonn Coghlan will be prominent, but people will also acknowledge that success at world level did not come instantly and perseverance was a keystone of Eamonn’s success.