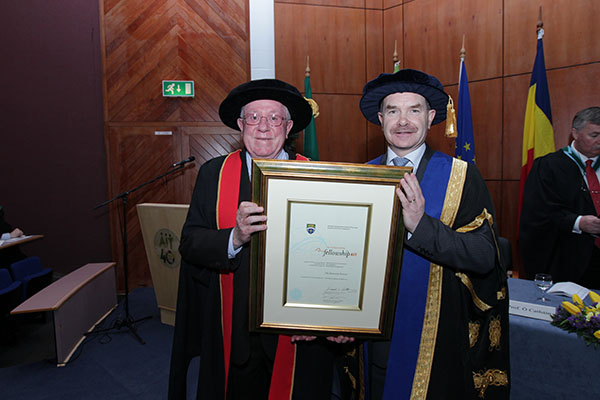 Donald E. Panoz was born in Ohio in 1935. His father was Eugenio Panunzio, a first-generation American who enjoyed success as a professional boxer, changing the family name to Panoz to better fit on the back of his robe, a pragmatism that was to characterise Don’s career.

Don attended high school at the Greenbriar Military Academy where he first met Nancy, whom he was later to marry. Following service in the Korean War, Don started studies in pharmacy and business at Duquesne University, but left to buy two pharmacies.

In 1960, after just two years in retail, Don took his first gamble, selling off the drugstores and buying a condemned skating rink in Pittsburgh. There, Don co-founded Mylan Pharmaceutical Corporation. Don, at the age of 25, became the youngest CEO of a US pharmaceutical company.

Don installed a laboratory in what was described as a garden shed in Dublin, backed by just four employees – as well as receiving assistance from Nancy and their five children – the new company began work on its first system for controlling dosage delivery.

In the seventies, maintaining therapeutic drug levels represented a particular challenge. Don took up this challenge, developing an idea for controlling the rate a drug was delivered once in the body.

Elan’s first contract came from the British arm of the Dutch company – Organon. In 1972, Elan licensed its new process as Tetrabid, which became an immediate success for Organon. Elan adapted Tetrabid’s technology to other antibiotics during the first half of the 1970s. By the middle of the decade, Don had recognised the possibility of adapting this technology to other types of drugs.

Elan itself remained focused on research and development, establishing a new R&D centre in Athlone in 1978. It is interesting to note that Elan’s address is Westmeath, although the facility is in Roscommon. This anomaly is caused by Westmeath receiving its post in the morning and Roscommon in the afternoon. As part of the deal to set up in Athlone, Don obtained agreement that a part of Roscommon would be reclassified!

By the early 1980s, Elan had contracts for 25 pharmaceuticals from 16 different companies. In 1981, Elan Pharmaceutical Research Corporation was established in Gainesville, Georgia, which took over licensing Elan’s technology to the US pharmaceutical industry.

Don acquired Irish nationality, (after all his mother is Irish!) renouncing his US citizenship.

By 1983 the company had become extremely profitable. The impending launch of a number of new products, made the company’s future seem particularly bright. As Don told Forbes magazine during an interview: ‘We could go fishing tomorrow and within five years we’d earn $10 million a year based on contracts we already have.’

This optimism led Don to float the company’s US subsidiary on the NASDAQ, in January 1984. Merrill Dow contracted with Elan to develop a new delivery system for a treatment for hypertension. By 1989, Elan had successfully guided the new formulation through the FDA approval process and the new Cardizem SR rapidly became one of the world’s most prescribed high blood pressure medications.

In 1985, the company opened a new Institute of Biopharmaceuticals in its Athlone home base, and also built its first manufacturing facility there. The company became the first to receive FDA approval for its smoking cessation nicotine patch in 1992.

During 1990, Elan became the first Irish company to list its stock on the New York Stock Exchange, while at the same time the company added listings on the Irish and London stock exchanges.

Elan continued to expand its manufacturing base, with the acquisition of a company in Lugano, Switzerland, in 1993, and another in Israel in 1995.

During the mid-1990s, Don withdrew from active leadership of the company to focus on other interests – Chateau Elan Vineyard and Golf Resort, Panoz Sports Cars and he became a significant player in the US motorsports industry.

Don is well known as a philanthropist. He says: ‘You create the wealth, you work for it, and you earn it. You do it in an honest fashion. Then you have something to improve the lives of everyone else.’

This philosophy validates Don’s philanthropy. This ideal was instilled in him from his early childhood when his mother used to pack extra sandwiches to give to other kids at the school who didn’t have a meal. That’s how he was raised and that is how he lives his life.

Don and Nancy are significant contributors to Emory University Healthcare Center, specifically to their efforts in advancing breast cancer treatment. Another institution close to Don and Nancy’s heart is Eagle Ranch, a Christian home for boys and girls in crisis. In 2009, Don joined other motorsports icons to give considerable financial support to Malaria No More to end malaria infestations in third world countries.

Don is a renowned dreamer. He is quoted: ‘I’ve been blessed to be a dreamer. I dream in Technicolor. I can visualise from start to finish, what it’s going to take to make something happen.’ However, Don credits his success to the following: ‘My best friend Mike, my wife Nancy and kids, young bright professionals and a common sense regulatory body all helped me make that dream come true.’