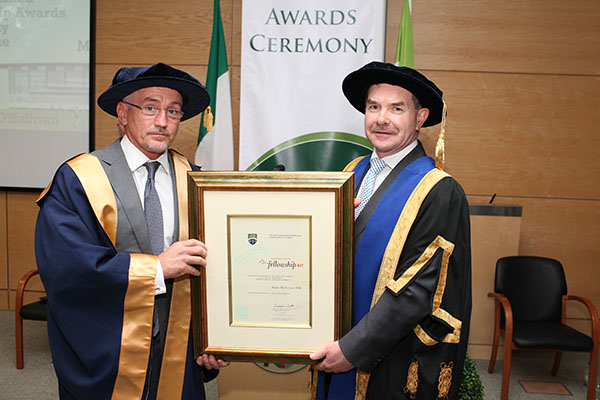 It is a special honour to introduce Barry McGuigan, a boxing legend whose iconic status transcends the sport.

Barry’s interest in his craft began at the age of 11, when he discovered a pair of old boxing gloves in a derelict house in Clones. That he opted for a career in the ring is not surprising because, as a child, he displayed remarkable energy and a keen competitive instinct. By way of example, I could mention how he often climbed to the top of the tallest lamppost in the town, or that memorable visit to Dublin Zoo when he engaged a chimpanzee in a headlock to test their relative strengths, but I do not wish to embarrass him.

Boxing has fascinated many famous writers, including Ernest Hemingway who himself had delusions of adequacy as a fighter, and once remarkably declared: ‘My writing is nothing, my boxing is everything.’ Barry’s ambition from the outset focused on the ultimate prize, as he enthusiastically embraced what Paul Haggis, writer of the screenplay Million Dollar Baby, calls ‘the magic of risking everything for a dream which no one sees but yourself.’

He realised his dream on this very date 27 years ago, by defeating Eusebio Pedroza over 15 tension-filled rounds to become Featherweight Champion of the World. The scene was set before the first bell, when Barry’s father Pat gave a rousing and emotionally charged rendition of ‘Danny Boy’. The fact that Pedroza was making the twentieth defence of his crown over a seven-year period, the enormous goodwill towards Barry and the unique magnetism of the occasion attracted 27,500 spectators to the London venue, over 20 million television viewers across Ireland and the UK, and an estimated worldwide audience of 200 million people. They witnessed drama on the grandest scale. History records that talent, technique and tactics delivered the victory, but I will now tell you the full story. Not everyone knows that Barry’s legion of enthusiastic supporters included the Poor Clare Sisters in Belfast, the unpaid psychologists of the ongoing Troubles in Northern Ireland. On that historic night they were given a special dispensation to watch the big fight on television. With a congregation of nuns cheering on their friend and storming Heaven with their prayers, his poor Panamanian opponent simply had no chance!

Barry carried the mantle of world champion with an easy, natural grace, proving that in sport, as in life, it is not the title which honours the holder but the other way around. Many accolades followed, commencing with his selection as BBC Sports Personality of the Year in 1985. He was inducted by his peers into both the World Boxing Hall of Fame and the International Boxing Hall of Fame, fitting tributes to one of the outstanding fighters of his generation. Barry also received an RTÉ Hall of Fame award, was the subject of a ‘This Is Your Life’ tribute on ITV, and obtained an MBE. His compelling story influenced the film, The Boxer, for which he spent two years training lead actor Daniel Day Lewis, and also choreographed the fight scenes.

Mark Twain was probably one of the first to pose the following question; why is it that physical courage can be so common in the world and moral courage so rare? Barry exemplified both, as he strove to promote peace and understanding during the aforementioned Troubles. He never needed a compass to navigate the geography of belonging or of relating to others. As a result, he could walk up the Falls Road or down the Shankill Road and feel equally at home. Building upon the esteem in which he was held, Barry’s vision was to replace revenge and retaliation with respect and reconciliation. Leave the Fighting to McGuigan, the title of his biography in 1985, soon became a mantra. Under the banner of sport and the flag of peace, which was carried into the arena before each contest, he helped to unite a generation. This vital contribution was officially acknowledged when he was conferred with a United Nations ‘Inspiration for Peace’ award in 2010. For the past 30 years, Barry has also been a keen advocate of integrated education in Northern Ireland.

The former US Secretary of State, Henry Kissinger, said he never knew who to contact when he wished to speak to Europe. The boxing community and anyone else seeking unconditional support or wise counsel have no such problem. Barry is their source, because his natural inclination is to help someone rather than to be someone. You can judge a person’s character by how they treat those who can offer nothing in return, or by the extent to which they do the right thing when no one is looking. From personal experience, I can confirm that Barry’s generosity of spirit neither expects a reward nor requires an audience. It is surely true to say that fame does not change people, it simply unmasks them to reveal, at either end of the spectrum, supreme egotism or ‘a heart full of grace and a soul generated by love,’ to quote Martin Luther King’s definition of greatness. On a similar theme, Bob Dylan has stated that, to be classified a hero, one must be aware of the responsibility which comes with the freedom. Cyclone – My Story, Barry’s much-acclaimed autobiography, published last year, fittingly contains a chapter entitled ‘Giving Back’. Time permits but a brief reference to how readily he finds his ease at the well of care.

Barry and his wife Sandra are patrons of CLIC Sargent, a leading organisation dedicated to caring for children and young people suffering from cancer, and their families, both in hospital and in the community. He is also one of the selected role models who act as ambassadors for the Laureus Sport for Good Foundation, an apolitical charitable initiative which promotes the universal power of sport to effect social change across the globe. The Barry McGuigan Boxing Academy was launched in 1999 to help young people achieve their academic and sporting goals and to encourage them to remain in education. Six years earlier, he helped establish the Professional Boxers’ Association to support the welfare and education of active fighters. Zealously committed to the concept of lifelong learning, Barry had commenced his own personal development programme even before he retired from boxing in 1989. With trademark discipline and dedication, he cultivated a mastery of English, his favourite subject at school, to become an outstanding boxing analyst and writer, media communicator and guest speaker. The latter function he has performed with distinction for this institute three times, most recently when delivering the motivational address at a conferring ceremony in Castlerea Prison. I recall how anxious he was on that occasion to meet the prisoners, and how he encouraged them to think positively and to change direction upon their release.

Barry’s achievements, dignity, humanity and philosophy of life are truly inspirational. Perhaps a fitting way to express the gratitude of everyone who knows him personally or by reputation is to conclude by paraphrasing the words of William Butler Yeats: ‘Think of where man’s glory begins and ends, and say, our glory is, we have such a hero, and friend.’